It certainly feels like spring. It’s been pretty spectacular weather for President’s Day Weekend, and a lot of people are out and about enjoying it around the Tidal Basin and National Mall. It’s also starting to look like spring–the first daffodils are starting to come out. And it’s not just a blip–plenty more days in the 60s and 70s are expected in the coming weeks.

While the vast majority of trees haven’t yet reached the green bud stage (the first stage tracked by the National Park Service in the blooming process), the indicator tree has started showing green buds. It’s typically a week to ten days ahead of the others. With the warm weather expected over the next week, it shouldn’t be long before the others join it. If so, it would be relatively early, but not unheard-of early. The NPS judged that in 2008 (when the peak bloom was March 26) 70 percent of the trees had reached the green buds stage on February 19.

With all this warm weather we’ve had so far and are expected to have in coming weeks, odds are looking pretty good for an early bloom in mid- to late-March. Of course, it’s never a sure thing; it’s still possible for things to slow down if March turns very cold, but so far there’s not much in the forecasts to suggest that there’s much risk of that. As an example, this map from the National Weather Service is pretty telling–it maps the likelihood of above-average temperatures (orange and red) and below-average temperatures (blue) for the first week of March.

Temperatures might drop back a bit closer to normal after that, and it’ll be interesting to see if that colder pattern that’s currently out west will make it’s way across to this coast, but so far it hasn’t been making much of a dent. (Apparently the summit at Tahoe has had an impressive 36 feet of snow so far this season.) As you can see from this table, it has been consistently warmer than normal over in these parts through the winter.

This tree, known as the “indicator tree,” is consistently a week to ten days ahead of the others. As you can see, the green buds are coming through. I have more on the indicator tree here. 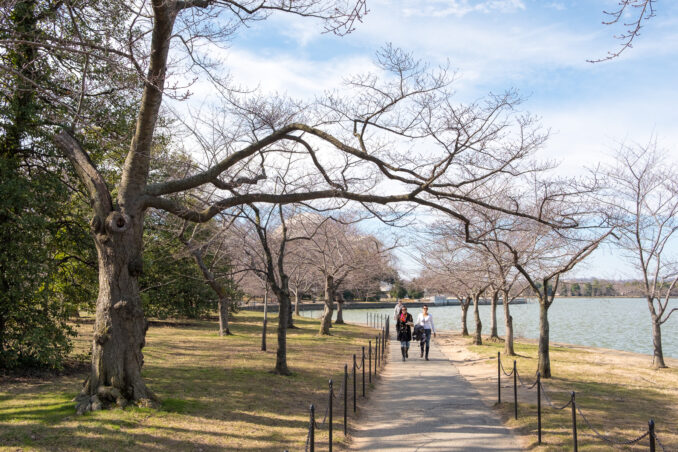 The indicator tree is the large one on the left with the branches stretching over the walkway.

Unfortunately, its branches are high up, making it a challenge to get good close-ups, but you can clearly see the green buds coming through.

Elsewhere Around the Tidal Basin 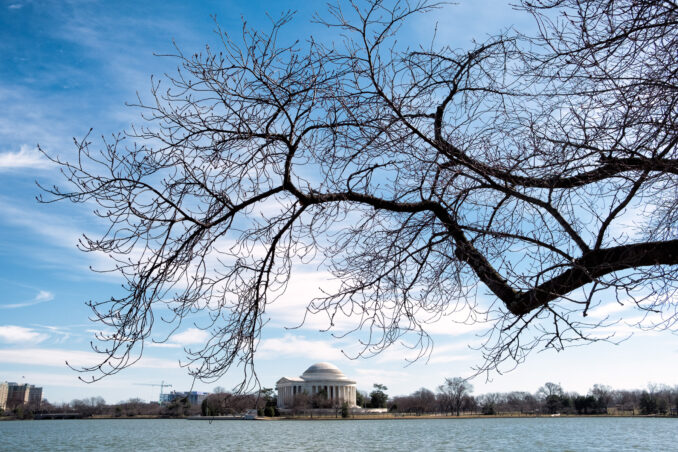 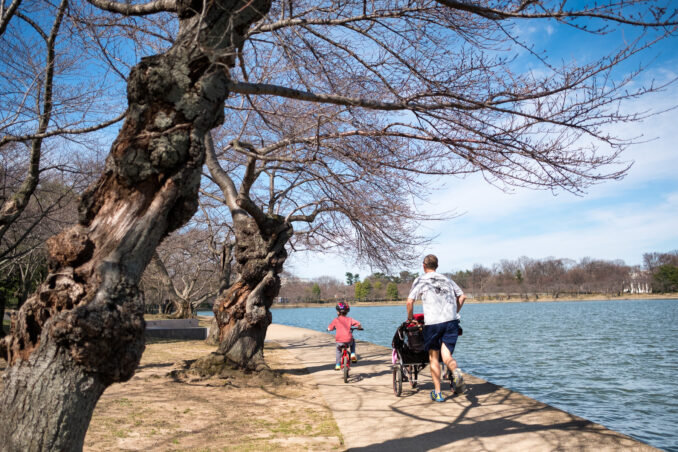 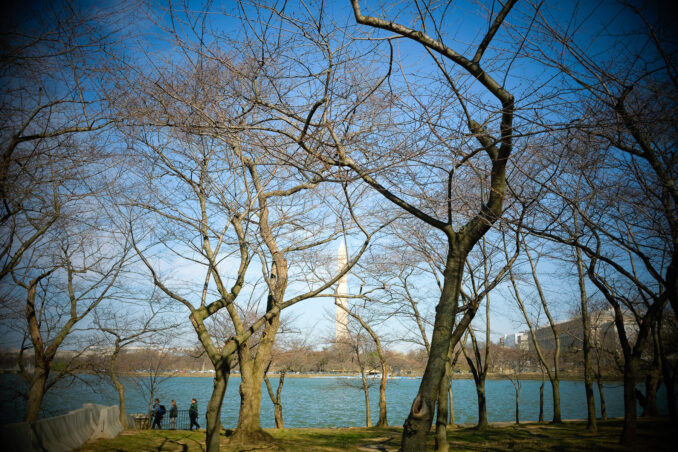 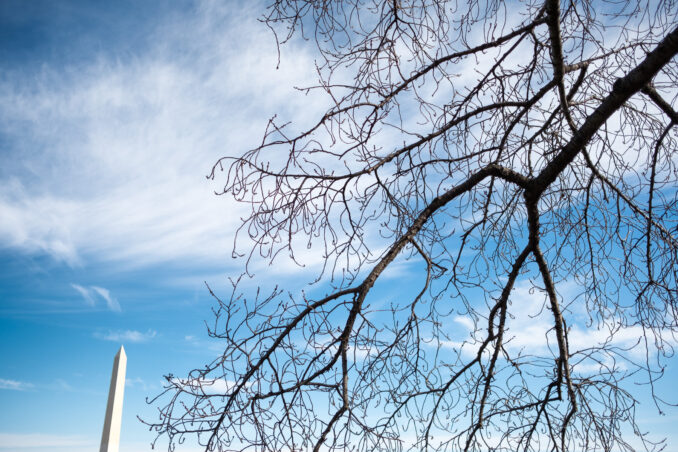 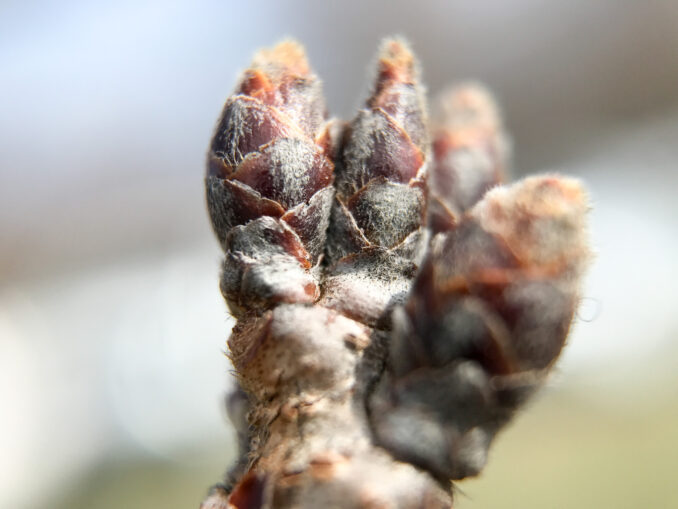 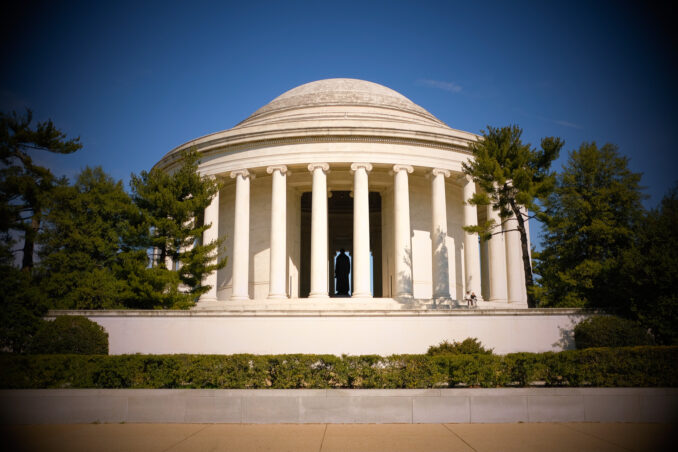 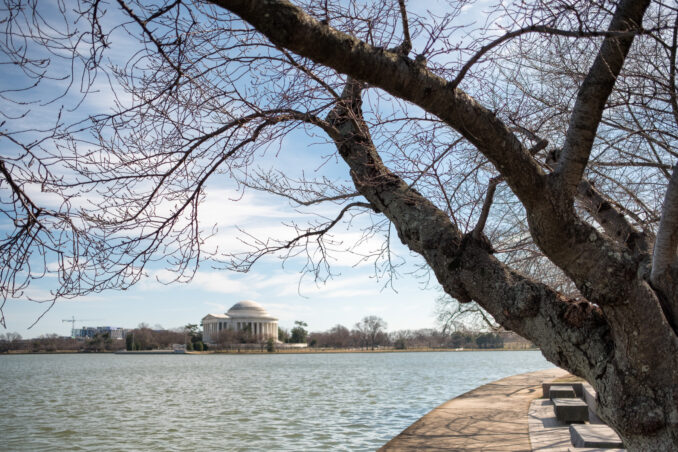 Some of the daffodils have just started coming out. I took these this morning next to the LBJ Memorial, just across the Potomac on the GW Parkway.

The flowering trees I wrote about last week, next to the World War I Memorial, are still blooming.

Unfortunately, the trees aren’t the most photogenic in terms of being a backdrop for portraits, but if you’re looking for them, I have information on how to find them here.

In the past few winters the Reflecting Pool has been drained for one reason or another. But it hasn’t been drained this year, so if you’re hoping to get some nice reflection photos you’re in luck.

The water has been drained from the fountains at the World War II Memorial and the FDR Memorial.

Looking for travel stock photos or prints? I might be able to help. You can search my collection here:
If you already have a buyer account with Alamy and would prefer to use that, you can search my images directly here.
569shares