The cool weather of the past few days brought things to a crawl, but now that we’re entering a warmer stretch the pace should start picking up again. It’s overcast and warmer, with a few sprinkles of rain.

It’s looking increasingly likely that we’re going to see a drawn-out bloom this year. The trees are at an unusually wide spread of development stages. A couple are already flowering. Many aren’t far from the puffy white stage just before the flowers open. And many are much further behind. Some are even still in the green buds stage, the first one the NPS tracks. The NPS determined that 70 percent of the Yoshinos had reached the extension of florets stage on March 6.

To some extent, that’s normal–they’re not on precisely the same schedules in any given year, and there’s always some natural variation. But what’s different about this year is that the range is unusually broad. So rather than having them all popping together within a day or two, we’re likely to see a much more gradual process and a longer, perhaps less dramatic, bloom.

That’s good news if you’re trying to time your visit and can’t make it during the predicted peak bloom dates (currently March 14-17). It means that your chances of catching at least some are better than they might be in a “normal” year.

So the natural question is: Will the snow affect the cherry blossoms?

It might. As with frost, in the right (or wrong, if you will) mix of circumstances, freezing temperatures can damage the flowers and buds or even halt the bloom. It hasn’t ever actually stopped Washington DC’s cherry blossoms from blooming since records started being kept in the 1920s, but it remains a real possibility.

If we do get frost and freezing, the effect that it has on the cherry blossoms depends on what stage they’re at. While they’re wrapped tight, it’s not much of an issue. As they get further along the stages before flowering they become more vulnerable to frost and freezing.

Hopefully they won’t share the fate of the saucer magnolias. The cold weather over the weekend wiped out their flowers that were looking so magnificent just on Friday. But the current forecast expects sub-freezing temperatures, with or without snow. And that could present problems. Naturally, I’ll be watching it closely and posting updates.

Examples of the Variation

As an illustration of how striking the variation is, these four photos were taken of trees right next to each other, all within about a 30-foot span, and all this morning.

In a normal year, they’re gone by a week after the peak bloom date, often sooner. So if the peak bloom ends up falling in the predicted March 14-17 range, it would usually mean that there wouldn’t be much left to see by March 25. I’ve put together a photo timeline that gives a sense of what you might expect to see in the days after peak bloom.

But there’s something else unusual about this year aside from how early it is: because the trees are at such a broad range of a development stages we might end up seeing an unusually gradual and drawn-out bloom.

This doesn’t really fit the normal pattern, so it’s impossible to say with much confidence what’s going to happen, and while it’s still unlikely that there’ll be much left by March 25, it’s not impossible that there’ll still be some late stragglers still flowering.

The chances are much reduced for the weekend of April 1-2. But it’s possible the Kwanzan cherry blossoms might be starting to bloom by then. There are fewer of them, but they’re very pretty. I have more information on them and how to find them here.

Could frost or snow be a problem?

Perhaps. See above for a more detailed answer.

Around the Tidal Basin itself, only a couple of trees are currently blooming. One is the indicator tree. I have directions on how to find it here. More photogenic is a large tree that’s over next to the FDR Memorial. You can’t miss it–it stands out (see the photo here).

There are also some cherry blossoms of a different variety blooming along the Potomac waterfront along Ohio Drive. The densest cluster is on the Lincoln Memorial end, near the John Ericsson Memorial. There are some others scattered elsewhere, such as the intersection of West Basin Dr SW (the road that runs by the FDR Memorial and MLK Memorial) and Ohio Drive SW.

Is still open normally for parking.

It will be closed next week to accommodate the National Cherry Blossom Festival Welcome Center.

There are no traffic restrictions in place along Ohio Drive yet. Traffic patterns and parking remain normal. And it’s still very quiet around the Tidal Basin, so finding a parking spot isn’t a problem. 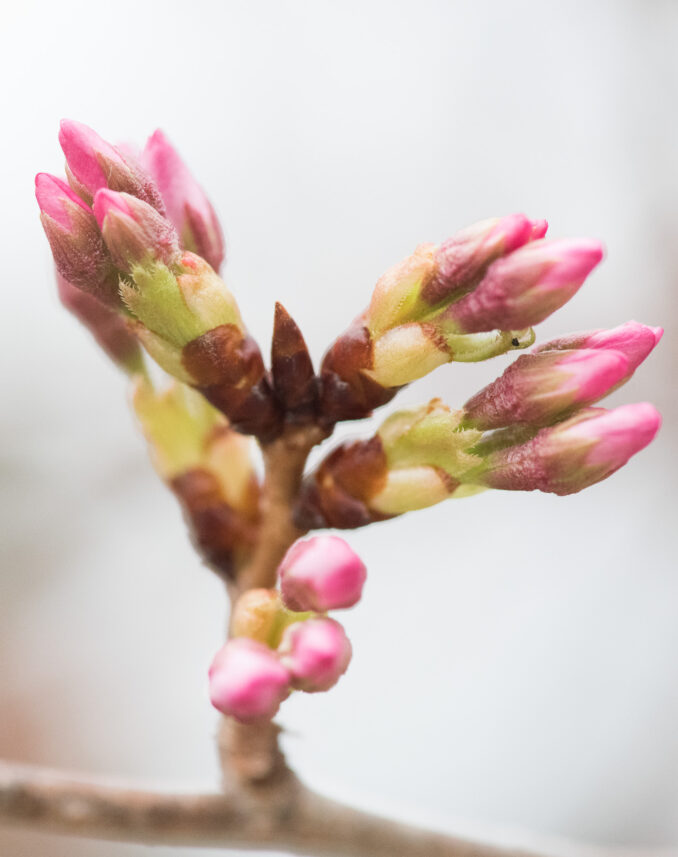 Looking for travel stock photos or prints? I might be able to help. You can search my collection here:
If you already have a buyer account with Alamy and would prefer to use that, you can search my images directly here.
417shares