There’s been quite a lot happening in the past few days. The big news, of course, is that the National Park Service has announced their peak bloom prediction for 2017. They predict that it will be sometime between March 14 and 17. The earliest on record so far is March 15, which happened in 1990.

See below for other bits and pieces of news. First, though, a quick update on where things stand at the Tidal Basin.

It’s been quite cool and there’s a stiff, cold breeze. We even had a dusting of snow early this morning and some very light flurries even around lunchtime. So, for the past couple of days, at least, the temperatures have been much more normal for this time of year.

The vast majority of trees are not yet blooming and still have some work to do. While it’s perfectly normal for the trees to be at different stages–they’re not all on precisely the same schedule–the spread seems wider than normal this year. Some trees are not far from flowering; others are still in the green buds stage. Sometimes trees that are right next to each other are at opposite ends of the spectrum. It’ll be interesting to see how that plays out for the bloom. It might be that we end up with an unusually drawn out flowering process this year.

But the good news: that if you head down anytime now you can find at least some cherry blossoms out. Go with muted expectations, of course. For now, it’s only a very small handful of trees—maybe half a dozen, at most, out of the thousands of trees in the surrounding area—but they’re there if you go looking for them.

The first tree flowering is the indicator tree, which has had flowers coming out for several days now. It’s blooming properly now. It’s not necessarily the most photogenic of the trees around the Tidal Basin–those are probably the grizzled old, original trees over the other side, near the FDR Memorial and MLK Memorial—and not ideal if you’re wanting to take selfies with the cherry blossoms, but you can at least say you saw some. I have some photos of it from this morning below, and there’s information on how to find it, along with a map, here.

Much prettier is a large tree over next to the FDR Memorial. You can see some photos of it from this morning below. It’s on the bend that juts out a bit into the Tidal Basin and has some nice low-hanging branches.

There are also a few trees of other varieties just a short distance away along the Potomac. Head over toward the John Ericsson National Memorial, on the Lincoln Memorial end of Ohio Drive SW. They also have some sweeping, low-hanging branches. The flowers are just starting to come out.

And the autumn-flowering trees around the base of the Washington Monument still have some flowers on them. There’s more on them here.

And finally, they’re not cherry blossoms, and it’s not the Tidal Basin, but the saucer magnolias in the Enid A. Haupf Gardens are looking absolutely spectacular. The photo from the top of the page was taken there this morning. There’s a couple more photos and information below.

They’ve also judged that 70 percent of the trees have reached the florets visible stage. That’s the second of the six stages in the blooming process that they track.

Because of the early bloom, the opening of the 2017 National Cherry Blossom Festival has been moved up to Wednesday, March 15 (originally March 20). It will still run through Sunday, April 16. In practical terms, this means that the Tidal Basin Welcome Area and ANA Performance Stage (both in the parking lot on the northeastern side of the Tidal Basin off Maine Ave SW) will open on March 15, earlier than originally planned. It also means that the Festival is looking for volunteers to help–you can find further details and sign up here.

If you’d like to reserve a paddle boat, you can now do so online. Payment is required up front to make the reservation, and only about a third of the boats are available for reservations; the rest are kept for walk-ups.

Now that that NPS has announced their peak bloom forecast, I’ve been getting a lot of questions about what it means for scheduling and travel planning. Here are some common questions and a quick stab at some answers.

Does it mean that we’ll only be able to see on those three days?

No. It means that the day on which they expect 70 percent of the flowers to be out will fall during that timeframe. You can expect flowers out for at least 5-7 days, often much longer. This photo timeline gives a sense of what to expect in the days before and after the peak bloom day.

Which weekend would be better?

A lot of people can only make it on a weekend, obviously. Since the peak bloom forecasts fall midweek, a number of people have been asking which weekend would be better, the 11th-12th or 18th-19th.

At this point, it looks like you’ll be able to find plenty of flowers on either weekend. It really depends on which specific day peak bloom falls in determining what there will be to see. And there’s always the chance that the peak bloom predictions will be revised.

There’s a pretty “safe” period of at least two days before peak bloom to two days after where you can be very confident that you’ll see the trees in all their flowering glory.

The problem is that once you start getting three or more days after the peak bloom, the flowers tend to become more fragile and there’s more risk of petals being knocked off with wind or rain or storms. If the NPS’s peak bloom forecast pans out, I would expect the weekend of 18-19 to be excellent viewing. But it has to be qualified with at least some risk that the flowers might be well on their way out by then if the peak bloom ends up being at the beginning of their forecast range (ie. March 14) or even before.

On the weekend of 11-12 you can be very confident of seeing a lot of flowers, even if they haven’t yet reached peak bloom. After all, there are already trees flowering now, albeit very few. But more and more will come out between now and then.

You can also get a good sense of the kind of thing to expect in the days before and after peak bloom with this photo timeline I put together using photos from previous years.

Could frost cause problems?

With some cold temperatures forecast for the next couple of nights, several people have asked whether frost could present problem.

The answer is: potentially, yes. In the right (or wrong, if you will) mix of circumstances, it can damage or even halt the bloom. Frost hasn’t ever actually stopped Washington DC’s cherry blossoms from blooming—at least, not since records began being kept in the 1920s—but it remains a possibility.

It might even be more of an issue this year. One of the consequences of such an early bloom is that it’s still very possible for us to see frost. In this area, there’s still a good chance of frost all through March–in a normal year, anyway. And the weather forecast is calling for some very cold nights over the next few days.

If we do get frost, the effect that it has on the cherry blossoms depends on what stage they’re at. While they’re wrapped tight, it’s not much of an issue. But they’re now entering stages where they are vulnerable to frost and freezing. The best we can do is cross our fingers.

This photo, the one immediately following, and the one closer to the top with the Washington Monument in the background, are from the tree that’s flowering next to the FDR Memorial. 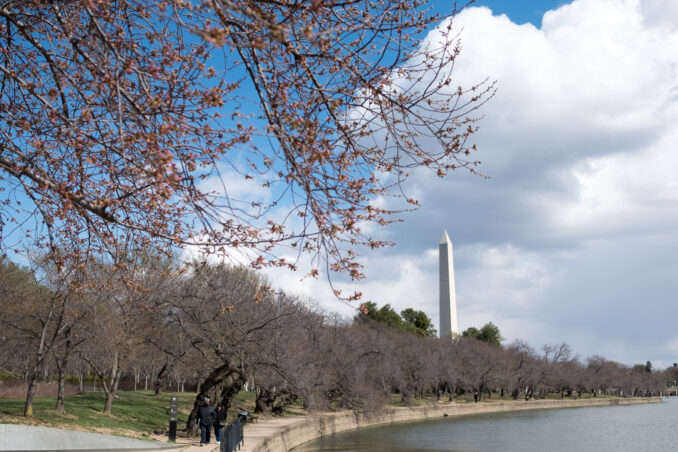 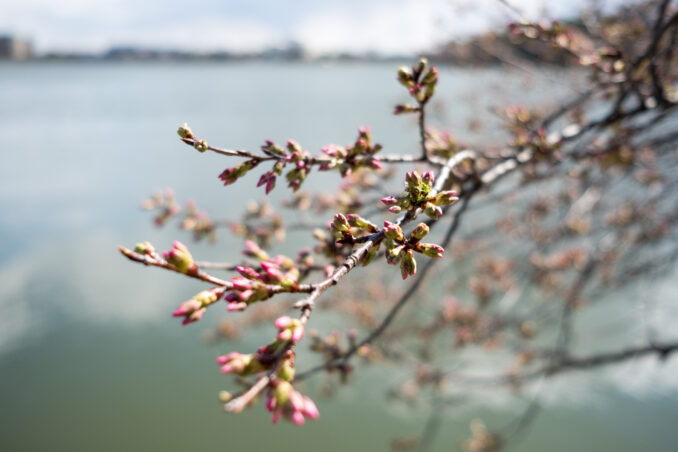 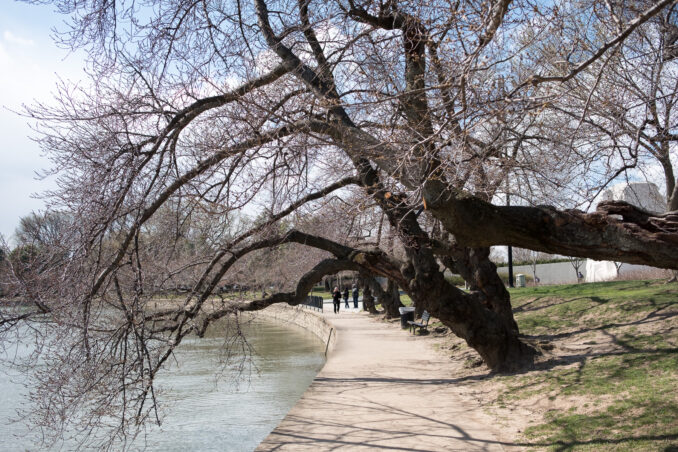 The saucer magnolias are looking gorgeous. It’s like stepping into a spring wonderland.

If the name doesn’t ring a bell, it’s the garden immediately behind the Smithsonian Castle, just down the National Mall.

If you’d rather not go that far from the Tidal Basin, the ones next to the George Mason Memorial are also now flowering and make for a beautiful backdrop for family portraits or engagement photos.

Looking for travel stock photos or prints? I might be able to help. You can search my collection here:
If you already have a buyer account with Alamy and would prefer to use that, you can search my images directly here.
1.2Kshares