That should be the last of the very cold nights, at least for a while. Things are now warming up a little. So we’re back in business.

They’ve taken a battering–the cold did wipe some of them out, especially ones that were in the very last stages before blooming right before the cold arrived a week ago today. As you wander around the Tidal Basin you come across whole trees of shriveled brown flowers.

But it didn’t knock all of them out. At least from outward appearances, a significant number seem to have made it through and are on the verge of flowering. The NPS has put some clippings under heat lamps to push them to open to determine how much damage they might have sustained internally that we can’t see. But as you can see in photo below, some of them at least look fine.

With the warmer weather, they’ll start to perk up a bit now over the next few days and they should start getting back on track.

With the damage that many trees have sustained, this year’s bloom is shaping up to be a more subdued affair than the kind of dramatic floral fireworks DC’s cherry blossoms are famous for. But even if it’s not a champagne year for the cherry blossoms, it looks promising that there’ll at least be a bloom.

Earlier stage cherry blossoms (about half of the total) survived the cold; should bloom late next week. #BloomWatch https://t.co/DCGBTpSIi8 pic.twitter.com/LUwKs3yke3

Here are a couple of 360° panoramas from this morning that give you a taste of what it’s like at the moment.

The Story So Far

If you’re just tuning in, here’s a quick recap of where we’re at.

It has been a topsy-turvy leadup to the bloom this year. A warmer than normal winter led into a very warm February. That brought the cherry blossoms to the verge of blooming around mid-March. It was even shaping up to be possibly the earliest on record.

Then an arctic blast hit (well, actually two, but the one over the past week has been the most significant for the cherry blossoms–the saucer magnolias got wiped out in the first one). It slowed the development to a crawl. It also caused widespread damage to many of the blossoms because it came right when many were just on the verge of blooming and at their most vulnerable. A snow and ice storm turned them into cherry blossom popsicles. But we’re through that now, and temperatures are moderating.

The NPS predicts that those trees that make it through the cold weather unscathed should reach peak bloom sometime around March 19 to 22. But because of the damage caused by a string of nights with cold, freezing temperatures, it is likely to be a more subdued and reduced bloom this year than the kind of full-throated, dramatic bloom for which DC’s cherry blossoms are famous.

Will the peak bloom be delayed further?

This is what the NPS said about this on March 17: “Earlier stage cherry blossoms (about half of the total) survived the cold; should bloom late next week.” They didn’t mention specific dates, but that suggests somewhere in the range of March 22-24, give or take.

What can I expect to see this weekend?

Now that warmer weather is back, the ones that made it through should start perking up.

So there should be some flowers to see even if it’s not a picture-postcard bloom right now. But I’d also recommend going with tempered expectations.

I posted a separate update on the status of the Kwanzan cherry blossoms yesterday.

Sunrise tomorrow at the Tidal Basin is at 7:14AM and sunset at 7:18PM.

The spring equinox is in a few days, which means that the sunrise and sunset is currently lining up along the National Mall (which is laid out East-West). The past two mornings have seen crystal-clear sunrises. Unfortunately, tomorrow’s looks like it’ll be drizzly and overcast.

It’s closed for the National Cherry Blossom Festival. They’ve started setting up temporary tents and facilities for the Welcome Center due to open on March 15.

The temporary traffic restrictions are now in place. Ohio Drive SW is now one-way, and the entrance to it from the Lincoln Memorial end is closed. To get to it you have to enter via Maine Ave SW and go around the Jefferson Memorial.

If you head down today, this is the kind of thing you can expect to see. These were all taken this morning, and the warmer temperatures today will be melting at least some of the snow and ice.

There’s a small amount of ice forming on some parts of the Tidal Basin overnight. 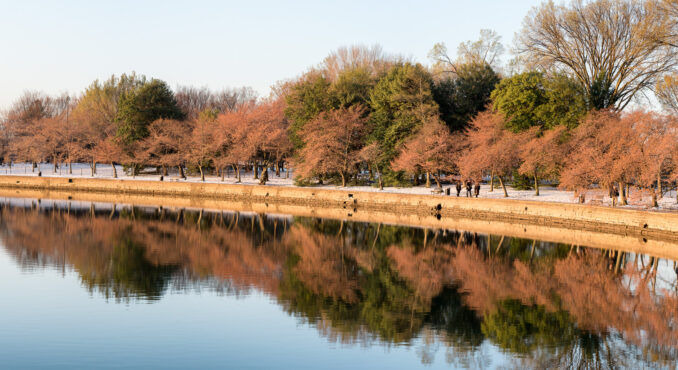 Looking for travel stock photos or prints? I might be able to help. You can search my collection here:
If you already have a buyer account with Alamy and would prefer to use that, you can search my images directly here.
244shares