It was cold last night, but so far there’s not a lot of visual evidence of damage unless you go looking for it. But we wouldn’t really expect to see much until we get the cumulative effect of a few nights, and it’s early days–there’s a lot more to come.

The weather has calmed down, but in terms of flowers out it’s basically the same as yesterday. If you’re heading down today, you can get a sense of what to expect to see from the photos below.

The cold weather over the next several days is going to keep things moving at a crawl, and there’s likely to be damage as a cumulative effect of several nights of freezing temperatures. And it looks like confidence is increasing that we might get hit with a good-sized snowstorm early in the coming week.

Could the cold snap be a problem for the cherry blossoms?

Cold weather is here now and is going to settle in for a while. We’ll see some very cold temperatures and perhaps even a good-sized snowstorm in the coming week. Of course, winter weather like this isn’t that unusual. For example, two years ago at this time the Tidal Basin was still frozen over–you can see photos of it here. The difference this year is that the cherry blossoms are at an unusually advanced stage right when the arctic blast is hitting.

So the natural question is: Could the cold snap affect the cherry blossoms?

Yes, it could. It’s going to slow things down, which is why the NPS pushed their peak bloom prediction dates back. It could also do some real damage.

As with frost, in the right (or wrong, if you will) mix of circumstances, freezing temperatures can damage the flowers and buds or even halt the bloom. It hasn’t ever actually stopped Washington DC’s cherry blossoms from blooming since records started being kept in the 1920s, but it remains a real possibility.

The effect that freezing temperatures and frost have on the cherry blossoms depends on what stage they’re at. While they’re wrapped tight, it’s not much of an issue. As they get further along the stages before flowering they become more vulnerable to frost and freezing. And that’s why it’s potentially an issue now.

Most of the trees are currently in what’s known as the peduncle elongation stage. The NPS judged that 70 percent of the Yoshinos had reached that stage as of March 8. And that just happens to be the stage at which they’re most vulnerable to frost and freezing.

It’s a two-pronged problem. Frost can cause damage. But even without the right mix of environment factors to actually create frost, cold temperatures below 28° can simply freeze them. Current weather forecasts are expecting temperatures to dip well below that over and over again–not just a single overnight blip. And that opens the possibility of perhaps killing off large numbers of the flowers (it doesn’t hurt the trees themselves). One of the NPS experts has discussed the possibility using numbers ranging from 10 up to 90 percent of the blossoms being killed (not the trees themselves–they’ll be fine). The Post has an interesting article on this topic that’s worth reading.

Naturally, I’ll be watching it closely and posting updates.

The early bloomers are moving past their prime. Yesterday’s wind and rain started knocking petals off, and up close the flowers are starting wither and look their age.

This is a small cluster of flowers that I’ve been photographing for the past several days. Aside from the different lighting conditions, you can see how they’ve been progressing.

Sunrise tomorrow is at 7:23AM and sunset at 7:12PM. If those seem late, it’s because daylight savings kicks in overnight.

Several photographers planning to visit in coming weeks have asked about locations to catch the sunrise. I’ve started putting together some detailed guides on particular vantage points, beginning with this one for the Jefferson Memorial.

If you’re planning to visit the Tidal Basin on Saturday–or anywhere downtown, for that matter–there will be road closures and traffic related to the Rock ‘n’ Roll DC Marathon. It’s not actually going by the Tidal Basin or around Hains Point, but there’s likely to be spillover effects through much of the downtown area.

You can find details of road closures here.

If you happen to be heading down to the Tidal Basin or National Mall for sunrise tomorrow, don’t forget that daylight savings kicks in overnight. Clocks jump forward one hour, so 2AM becomes 3AM.

In a normal year, it’s hard to predict with much confidence what’s going to happen, when. This is not a normal year in several sences, and that’s making it even harder than it is usually. There’s an early bloom. There’s an unusually broad spread of development stages. And we’re seeing seesawing temperatures, from very warm to very cold.

In light of the revised NPS peak bloom forecast, the weekend of March 25-26 is now looking much more promising than it was before simply because it’s now closer to the predicted peak bloom dates. If the peak bloom ends up happening on March 19, the trees will be well on their way out by the 25th. If it falls on March 22, there should be much more still left to see. It’s also possible that even the revised peak bloom prediction misses the mark.

I’ve put together a photo timelines that gives a sense of what you might expect to see in the days after peak bloom. The photos are only a rough guide–it might be that we end up with an unusually drawn-out and staggered bloom this year.

The chances are much reduced for the weekend of April 1-2. The NPS predicts that the Kwanzan cherry blossoms will reach peak bloom on April 11. There are fewer of them, but they’re very pretty. I have more information on them and how to find them here.

In the past day, many more trees have started flowering and it’s now much easier to find cherry blossoms out. It’s still nothing like full bloom, but you don’t have to look very hard to find some.

The largest cluster is around and in the FDR Memorial, but there are trees starting to flower all around the Tidal Basin.

It’s closed for the National Cherry Blossom Festival. They’ve started setting up temporary tents and facilities for the Welcome Center due to open on March 15.

There were restrictions in place this morning, but it’s not clear whether that was the start of the festival closures. I suspect it was more for the marathon, but I’ll keep an eye on it over coming days to see if they stay in place.

The good news is that once you’re there it’s still very quiet around the Tidal Basin, so finding a parking spot isn’t a problem.

If you head down today, this is the kind of thing you can expect to see. 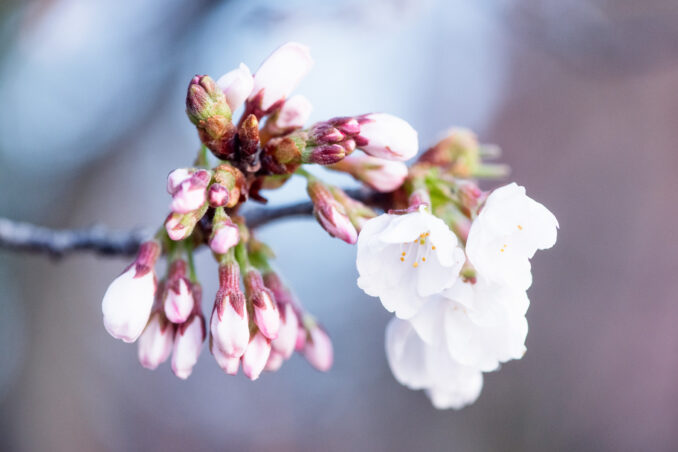 Looking for travel stock photos or prints? I might be able to help. You can search my collection here:
If you already have a buyer account with Alamy and would prefer to use that, you can search my images directly here.
226shares