The cherry blossoms are, in general, very kid-friendly. But there are some extra things to factor in when taking little kids so that the whole family enjoys it more. We have two toddlers and an infant, and some or all of them often come with me to the Tidal Basin to “help” with the cherry blossom watch updates. So we’ve had some practice with taking little kids to the Tidal Basin. Here are a few tips.

With young yet mobile kids, something to keep a close eye on is that there’s no railing most of the way around the Tidal Basin. And the section where there is a railing isn’t at all toddler-proof. I consider it a minor miracle that I’ve never seen anyone actually fall in. But I have seen strollers that have gone over and had to be abandoned (hopefully there were no kids in them when they went over the edge!).

It can get very crowded, especially on weekends when the cherry blossoms are in full bloom. Like this: 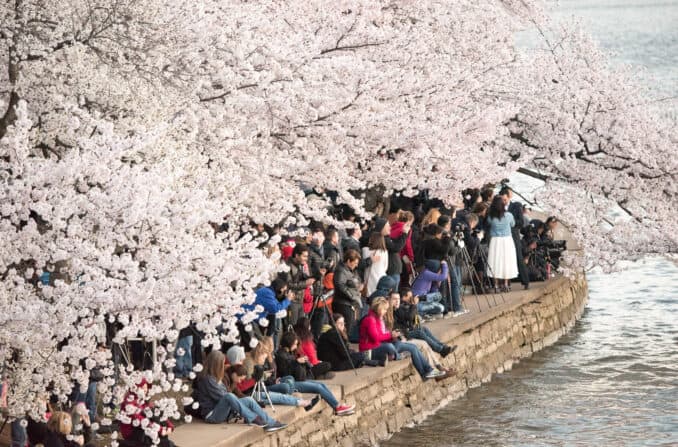 A good tip from the NPS Police is to take photos of your kids as soon as you arrive. That way, if they do happen to wander off in the crowd, you have the ideal reference photo with the right clothes etc that they can distribute to track him or her down as quickly as possible.

You’ll come across NPS Rangers, Festival volunteers, and police at various places around the Tidal Basin and won’t have much trouble finding one if you need one.

The emergency phone number in the US is 911.

During the cherry blossom festival, there’s a medical tent in the parking lot next to the paddle boats. Otherwise, flag down the nearest police officer or NPS ranger.

Most parents become pretty used to packing some snacks just in case, but there are some basic snack and food options around the Tidal Basin.

There’s a food tent in the parking lot next to the paddle boats. Here’s the menu (as of March 2019 / click for a larger version): 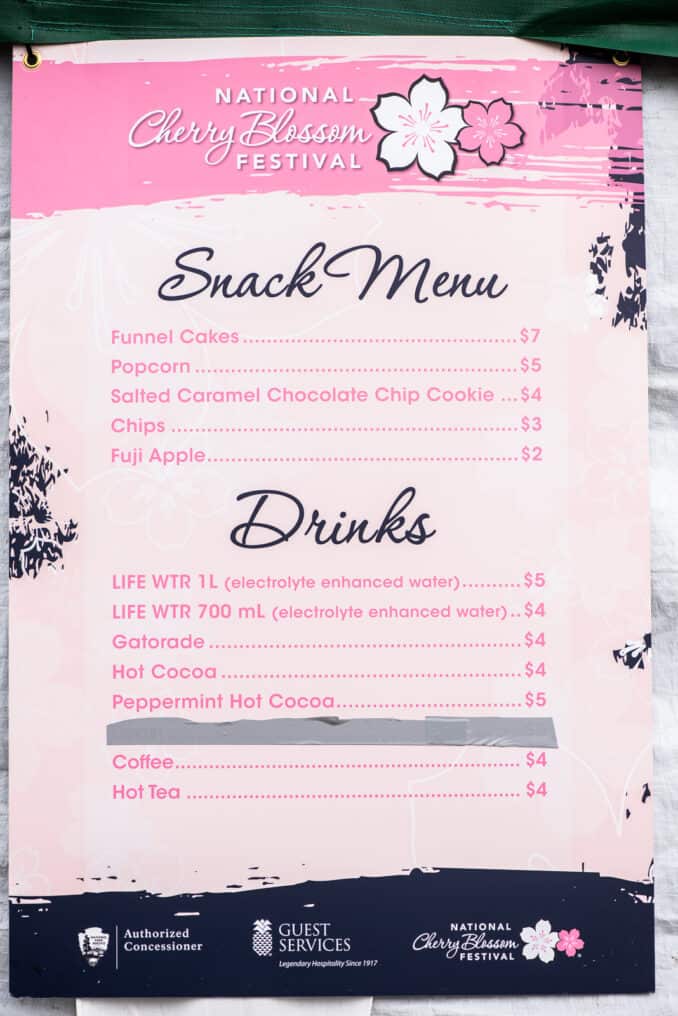 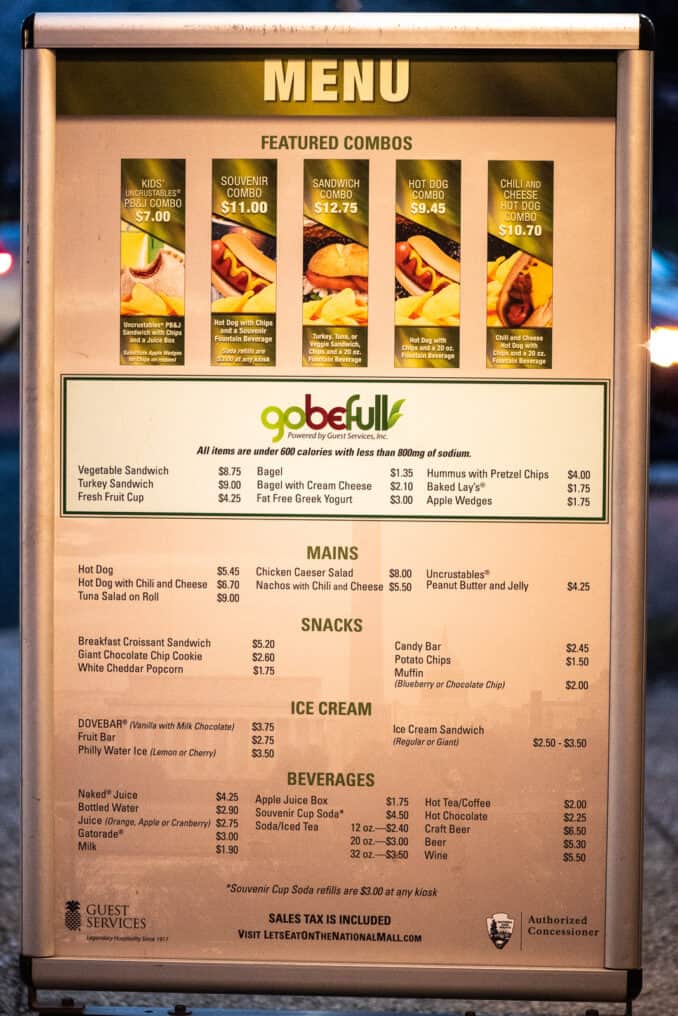 There are picnic tables in the parking lot next to the paddle boats, and there are park benches all the way around the Tidal Basin.

Those are really the only options for buying food and water in the immediate area. There’s a slightly bigger snack kiosk as you head up to the Lincoln Memorial which has a few more options.

Other food options are a bit further afield. The cafes in the Smithsonian museums are very kid-friendly and relatively close by. The American History Museum and the Air and Space Museum are probably the simplest and closest; both have big cafeterias. Something to factor in is that since they’ve added more stringent security checks at the entrances to the Smithsonian museums there are often lines to get in. If you’re taking a stroller, some have a separate line for those.

For quick snacks or quick takeout like hot dogs, you’ll see quite a few food trucks and carts around the edges of the National Mall, especially on Constitution Avenue in front of the American History and Natural History Museums.

There’s no problem using strollers, with the understanding that the walkway might be very crowded and you might be dodging people and camera tripods. And some of the walkway paving has seen better days.

Carriers are often more convenient if available, but especially for backpack-style ones, you’ll have to be extra careful going under low-hanging branches.

The paddle boat operators do keep life jackets for kids on hand that go down to quite small sizes. Kids are welcome in the boats–there are 2 and 4 person versions–but someone in the boat has to be at least 16 years old. You can find more about the paddle boats here.

During the National Cherry Blossom Festival, there are often some activities for kids set up in the Maine Ave parking lot (next to the paddle boats) like frames for them to take photos of themselves as beavers, as well as mural walls they can draw on.

Swimming in the Tidal Basin?

Swimming in the Tidal Basin isn’t allowed and wouldn’t be a good idea even if it was–the water is the same as in the Potomac, which is cleaner than it used to be but still more polluted than you’d like for swimming. Back in the early 20th-century, the Tidal Basin was one of the area’s popular swimming areas, but that’s no longer true.

Just back from the Tidal Basin, especially behind the FDR and MLK Memorials, are huge open spaces that they can safely run around in to burn off some energy. One thing to watch is that a some of the fields are favorites with large flocks of geese and can get covered in geese poop. But there are others nearby that are fine.

If your kids happen to be spotters–or have just had enough looking at trees—they’ll almost certainly see ducks, geese, squirrels, starlings, and seagulls. They might see geese flying overhead in formation. I have seen bald eagles down there, although not often. They might see the occasional fish jumping (or splashing). And across on the Mall itself they might see the horses of NPS’s Horse Mounted Unit (and they’re usually very accommodating for photos).

Also, the Tidal Basin is used as a flight path for military helicopters–they come in very low and loud, which our kids find very exciting. If you’re really lucky, you might even see three, heavy Marine Corps helicopters flying in formation to drop the President off at the White House or take him to Joint Base Andrews (formerly Andrews Air Force Base). One of them is Marine One (when the President is on board), but three identical helicopters fly in the formation so that no-one knows for sure which one he’s actually in. The two decoys peel off once they get right near the White House.

Young plane spotters will also see a lot of planes passing low nearby above the Potomac going in and out of Reagan National Airport. 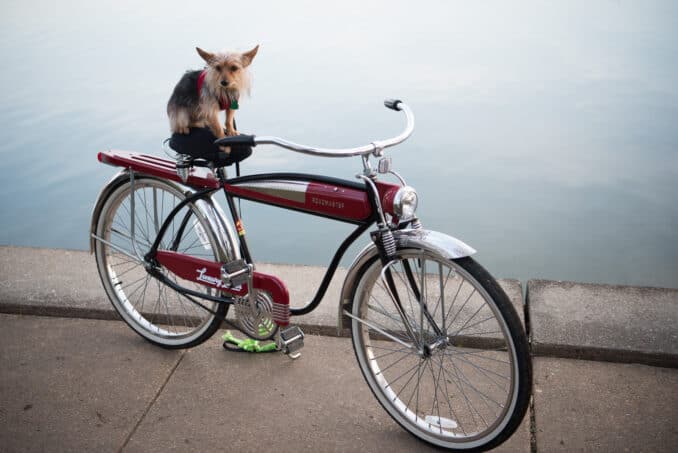 Don’t ask me what this was all about–I have no clue!

The nearest playground is in a large, open picnic area at Hains Point on the end of the island that the Jefferson Memorial is on. It’s right on the end of the island, with views out over the Potomac across and across to the planes taking off and landing at Reagan National Airport. It’s a very long walk from the Tidal Basin (over a mile and a half out the back of the Jefferson Memorial). A better bet is driving or catching the special DC Circulator shuttle bus that runs around East Potomac Pack during the cherry blossom festival. Catch it near the Jefferson Memorial and check with the driver that they’re going around Hains Point (fares are $1 each per ride).

If your kids are getting cherry blossomed out and getting something to play with or color in will help, there are gift/book shops next to the MLK Memorial, at the FDR Memorial, and under the Jefferson Memorial. There’s also a couple of dedicated cherry blossom gift-shop tents in the parking lot next to the paddle boats. All of them have books geared toward kids, coloring books, as well as other odds and ends.

Kids’ Books on the Cherry Blossoms

These books on the cherry blossoms designed written specifically for kids and can be useful for getting them excited about what they’ll see on the big trip.

Eliza's Cherry Trees: Japan's Gift to America
Buy on Amazon
Aimed at kids 5 to 8, this one tells the story of Eliza Scidmore’s persistent efforts in the early 20th-century to bring cherry blossoms to Washington DC.

Every year I see parents encouraging their kids to climb the trees to get a fun family photo. Please don’t. Aside from the safety issues, many of the trees that are most inviting to climb are over a century old and easily damaged. 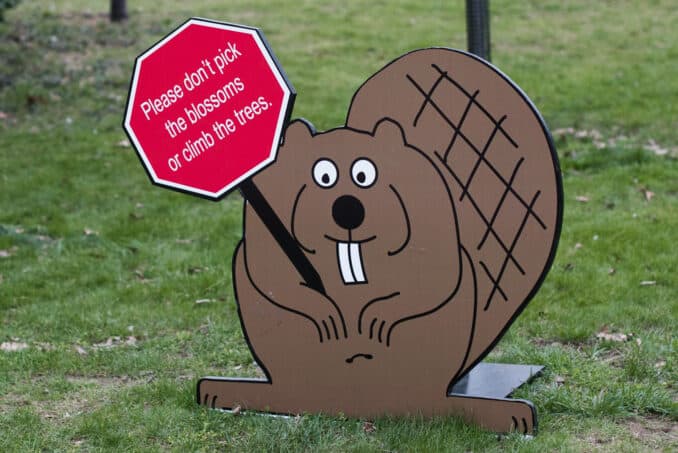 Images and product information from Amazon Product Advertising API were last updated on 2020-10-19 at 17:56.

Does Rain (or Storms) Affect the Cherry Blossoms?
The Floral Library