If this is your first visit to DC’s cherry blossoms, especially if you’re visiting on a nice weekend around peak bloom, be prepared for crowds. Big crowds. Locals are used to big events–they’re something of a DC specialty–but this is one of those times of the year that many locals wouldn’t be caught dead driving anywhere near the Tidal Basin. Even weekday morning commutes can become noticeably more clogged with cherry blossom traffic. 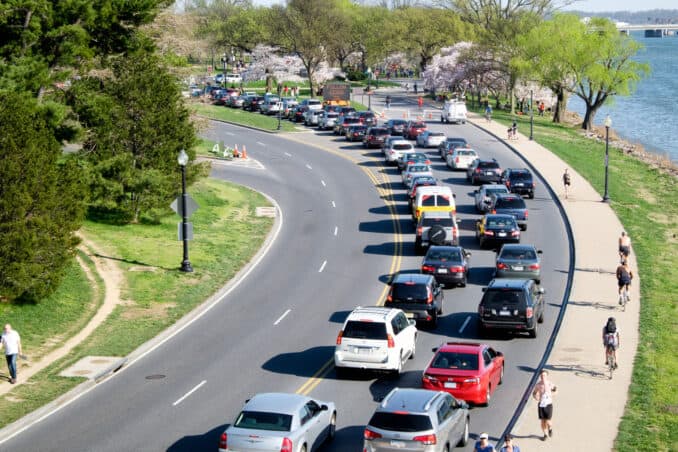 While the Tidal Basin is a large, spread-out area that can accommodate a huge number of people comfortably at any given time, you can count on traffic snarls and competition for parking spaces getting there, especially on weekends around the peak bloom. So I generally recommend against driving; there are often better ways to get to the cherry blossoms.

But if driving remains your best option for getting to the cherry blossoms, here are a few ideas on where to park.

Using a GPS? If you’re using your own GPS, here are some things you can enter that should get you there in various search modes: 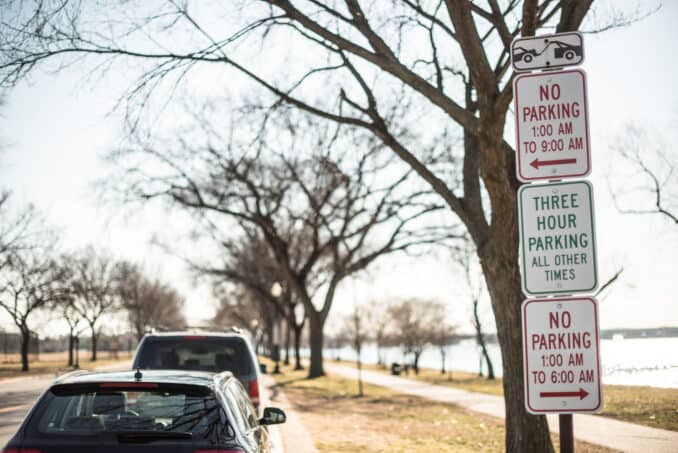 First, though, a word of warning: I strongly recommend paying careful attention to the signs. Most areas have some time restrictions, and temporary overrides are common at this busy time of year. The city’s legion of parking inspectors swarm the area and rack up some serious numbers. 155,636 parking tickets were issued during the 26 days of the 2013 National Cherry Blossom Festival (although not all of those were around the Tidal Basin). That’s about 6,000 a day. (DC parking fines generate about $92 million a year.) 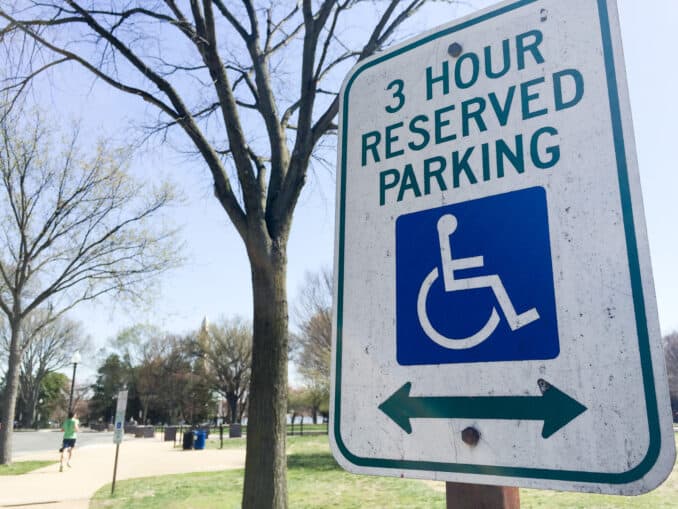 There are two areas immediately adjacent to the Tidal Basin that are designated as disabled parking zones. One is by the FDR Memorial; the other is by the Jefferson Memorial. They have room for a dozen or so cars between them. I’ve marked them in orange in the map below.

There used to be much more free parking near the cherry blossoms. But in the fall of 2017, much of it was switched over to metered parking. These areas are now metered:

You can pay with the ParkMobile app or using one of the machines near the spots.

For free parking, you’ll now need to go a bit further away. The spots around East Potomac Park near the golf course and Hains Point are still unmetered.

Maine Ave SW Lot. As of the fall of 2017, this is now a metered lot with a 3-hour limit. This is, in effect, the Tidal Basin’s main parking lot, but it’s closed during much of the festival to make way for the NPS’s Cherry Blossom Welcome Center (temporary facilities for the festival). (In red on map below.)

Ohio Drive SW. As of the fall of 2017, this is now metered area with a 3-hour limit. The metered section stretches from the Lincoln Memorial to the Jefferson Memorial.

During the height of the cherry blossom bloom there are special one-way traffic patterns put in place mean you can’t enter from the Lincoln Memorial end. To access Ohio Drive SW during this time you’ll have to enter via the Jefferson Memorial end. It’s accessible day and night with a 3-hour limit but has restrictions overnight and early morning (mostly 1am to 9am). There’s room for quite a few cars here, but it’s also a popular spot for tour buses which take up a lot of extra space. If you can’t find a spot here you’ll have to follow the one-way traffic pattern out onto Independence Avenue, and then go back around the Jefferson Memorial again.

West Basin Drive. As of the fall of 2017, the spots along West Basin Drive are now metered with a 3-hour limit. While convenient, there are relatively few spots here, and if you miss out on a spot you’ll have to continue on the one-way pattern, exit out onto Independence Avenue, and then go back around the Jefferson Memorial again. There’s a half dozen or so disabled parking spots here next to the FDR Memorial (in orange on map below).

Lots A, B, and C. As of the fall of 2017, all three lots are now metered with a 3-hour limit. These are some of the best options for parking for the cherry blossoms. They have quite a few spots, and it’s only a short, flat walk to the Tidal Basin. If you can’t find a spot in one you can try another without running into difficult one-way traffic patterns. They’re located near the foot of the 14th Street Bridge, behind the area where the George Mason Memorial is. To access them when the special festival traffic restrictions are not in force, go past the Jefferson Memorial to the T-intersection next to the George Mason Memorial. Turn left at that intersection and proceed under the bridged. The lots are on your left (the Potomac is on your right). When the festival traffic restrictions are in force, you can’t turn left at that intersection next to the George Mason Memorial (this is a new thing in 2018), and the way to get to these lots is to turn left before the Jefferson Memorial and take the long way around by following the parking signs.

East Potomac Park / Hains Point. This is a long, curved stretch around the edges of the peninsula. There are designated parking areas on the side of the road. It’s closed at night and early mornings. If you end up parking around East Potomac Park/Hains Point a long walk from the Tidal Basin, there’s a Circulator Bus that serves as a de facto parking shuttle ($1 per ride).

There’s quite a bit of metered street parking around the National Mall and L’Enfant Plaza areas, but pay careful attention to the signs that explain the time restrictions or temporary overrides.

There are several commercial parking garages in the L’Enfant Plaza area. Their hours and rates vary, but none is necessarily what you’d call cheap. You can reserve spots in some of them using apps like SpotHero, Parking Panda, and ParkNow.

Arlington National Cemetery. Arlington Cemetery has a medium-sized lot. It’s across the river, meaning a walk across Memorial Bridge. You can find the hours and rates here.

Where is the best place to park for the cherry blossoms?

The most convenient spots are on-street spots along Ohio Drive SW, along West Basin Drive that runs past the MLK Memorial and FDR Memorial, and in Lots A, B, and C behind the Jefferson Memorial. They’re all now metered with a 3-hour time limit.

Is there free parking for the cherry blossoms?

Yes, there is some free parking not far from the cherry blossoms, but not as much as there used to be. In the fall of 2017, many of the most convenient areas were converted to metered spots. You can still find free on-street parking further afield around East Potomac Park (near the golf course) and Hains Point. It’s a longer walk from those spots, but during the bloom season you can use the DC Circulator bus as a parking shuttle bus (fare is $1/person/each way).

Are the parking restrictions enforced?

Yes, although how rigidly they’re enforced varies. I recommend assuming that they will be enforced and also taking special note of any temporary overrides during the cherry blossom festival.

Looking for travel stock photos or prints? I might be able to help. You can search my collection here:
If you already have a buyer account with Alamy and would prefer to use that, you can search my images directly here.
36shares