At a press conference this morning the National Park Service issued their first cherry blossoms peak bloom prediction for 2016. 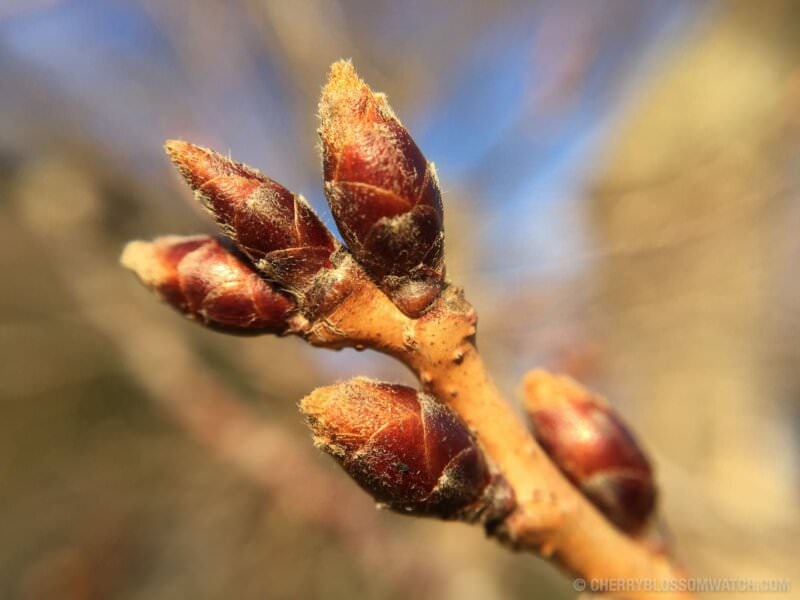 At a press conference at the Newseum this morning (March 2), the horticulturists at the National Park Service issued their first prediction for the season for when Washington DC's cherry blossoms will reach peak bloom in 2016.

They predict that peak bloom will fall sometime during the period March 31 to April 3.

That's a bit earlier than usual, in keeping with the warm start to the winter and the predicted warmer-than-average March. The historical average is April 4, but in the past few years we've had later-than-average peak blooms of April 9 and April 10.

How Are the Trees Looking Today?

The photo at the top of the page was taken this morning, and you can find many more in today's Cherry Blossom Watch update.

How Accurate Are These Forecasts?

The NPS horticulturists are the first to point out that they're not really confident in their prediction until about 10 days out. There are so many variables that can come into play, especially since the prediction is based on long-range weather forecasts a month or more out.

It is not at all unusual for the forecasts to be revised as we get closer to the date.

That said, they're also very good at it, and in the past couple of years they've stuck with their initial forecasts issued in early March and, almost six week later, have been essentially spot on.

What If I Miss Peak Bloom?

“Peak bloom” is a technical determination of when 70 percent of the flowers are blooming. It's a single day, and we won't know which exact day it falls on until it happens.

When the National Park Service says that they expect peak bloom to fall between March 31 and April 3, they mean that they expect the day that that 70 percent threshold is reached to fall within that period. It does not necessarily mean they'll be in full bloom for the duration of that entire period (although they might be). If the peak bloom date ends up falling on March 31, for example, the flowers will be on their way out by April 3-4. If the peak bloom date falls in the middle of that range, the trees will be in what we might consider full bloom for that entire period.

But you don't have to be there on the precise peak bloom date to see a beautiful sight. For at least two days before and at least two days after (and often longer both before and after) you can expect to see the trees in full bloom. And there can be plenty of flowers to see for several days extended well beyond that. But most of the flowers will likely be gone by about a week or so after the peak bloom date.

I have two posts that explain it in more detail and provide photos of what to expect in the days before and after the peak bloom date.

Are There Any Other Peak Bloom Forecasts?

The NPS might revise their forecast. And the other big one with a good track record is the one issued by the Washington Post‘s Capital Weather Gang. It often comes out a week or so after the NPS one, and doesn't always agree precisely with the NPS forecast.

From time to time there are some other ones issued that are worth noting. I keep track of them on the peak bloom updates page.