UPDATE: The NPS judged that the cherry blossoms have reached the “peduncle elongation” stage as of today, March 29. Only one more stage (puffy white) to come before peak bloom.

It’s now getting much easier to find at least a few blossoms coming out. Quite a few of the trees are starting to show a few flowers each, and while it’s still only a tiny proportion of the total, they’re easy to find all the way around the Tidal Basin. There’s a small handful of trees blooming more fully, but on most of the trees that are showing any flowers at all it’s only a handful on each tree.

I have some examples in the photos from this morning, below. You’ll also find further down the page some major tree surgery this morning on some of the most picturesque of the trees as well as an update on the magnolias.

While this morning has been overcast and foggy, this afternoon is shaping up to be very pretty, with sunny conditions and the highest temperatures we’ve seen in over a month (mid-70s).

The warmth today and tomorrow, and to a lesser extent into the weekend, will coax out more flowers.

For this weekend, you can find flowers, but it’s still by no means anywhere near full bloom. While cooler temperatures are expected to roll in for next week, there’ll be much more to see the following weekend (April 7-8). Now that we have a combination of more happening and warmer temperatures I’ll be posting updates more frequently. So stay tuned!

How it Looks this Morning

All photos were taken early this morning. 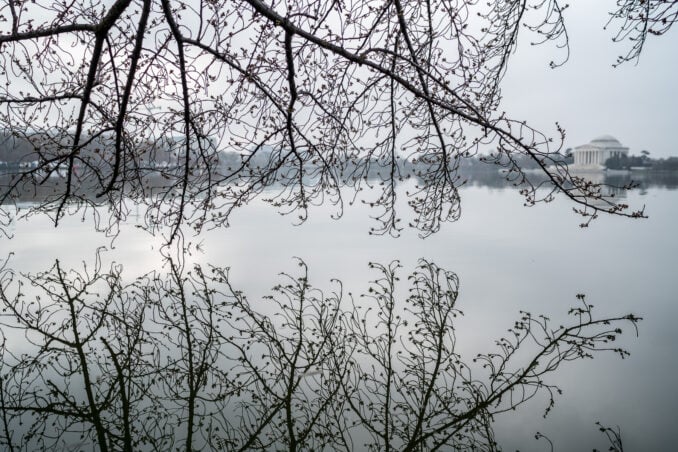 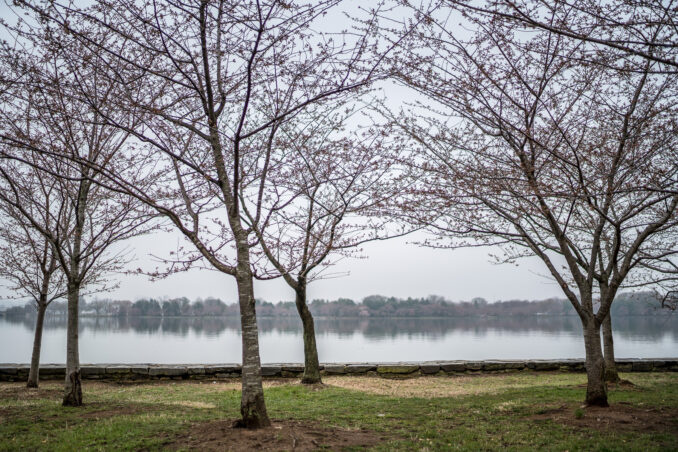 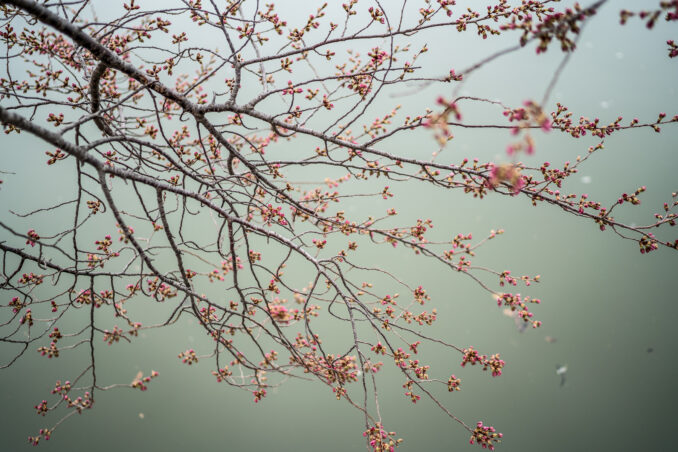 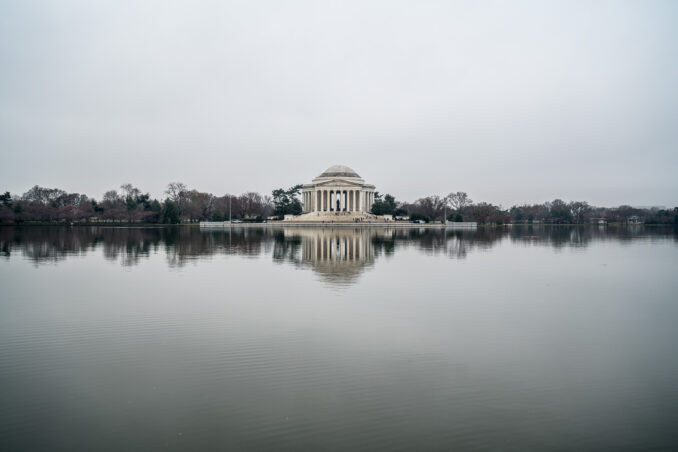 You can see one of the early bloomers standing out to the left of the frame. 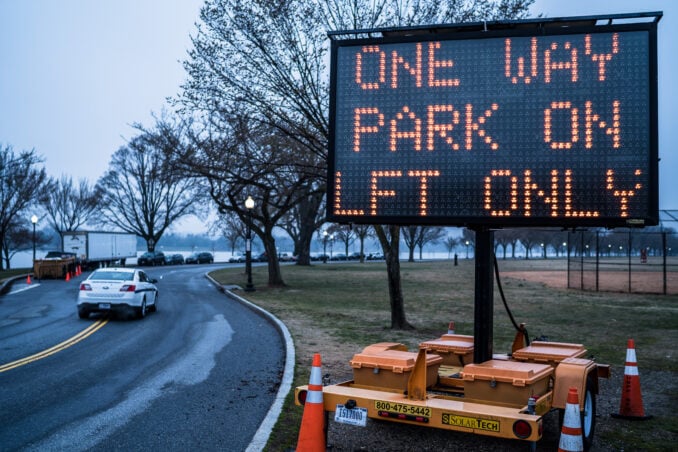 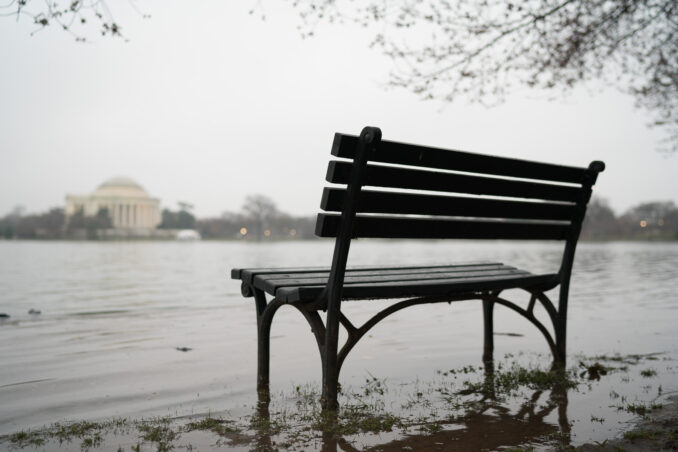 There’s not much to see at the Floral Library just yet. There’s a handful of yellow flowers out, but most aren’t ready yet, and the whole garden is fenced off at the moment.

Some of my favorites among the trees have been undergoing some major surgery this morning. These are some of the oldest of the tree near the MLK Memorial. With their big, heavy branches arching out over the path to the water, these grizzled trees have been some of the most photogenic, and they’re ones that feature prominently in the photos on this site.

But some of those branches have seemed to be hanging on by a thread lately and looked quite precarious. I posted some examples [a few weeks ago](https://cherryblossomwatch.com/cherry-blossom-watch-update-march-6-2018/).

The NPS team looking after the cherry trees have pulled the trigger and decided to take the branches down this morning.

The magnolias have been biding their time, but are finally starting to open up. The ones in the Enid A. Haupt Garden (behind the Smithsonian Castle) are open and looking wonderful. If you look closely, you can see scars from the sub-freezing temperatures last recently, but overall they’re looking magnificent. The photos below and at the top of the page were taken early this morning (in less than ideal light conditions).

If you want to enjoy them without the weekend crowds, this afternoon is going to be hard to beat with the combination of warm, sunny weather and flowers.

The magnolias at Smithsonian Castle are finally out. 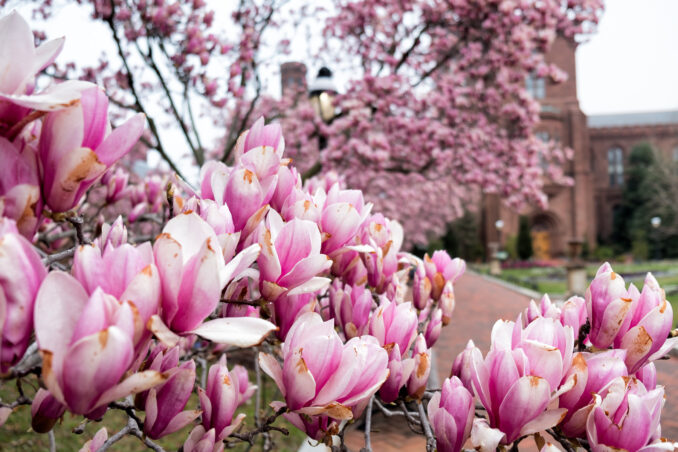 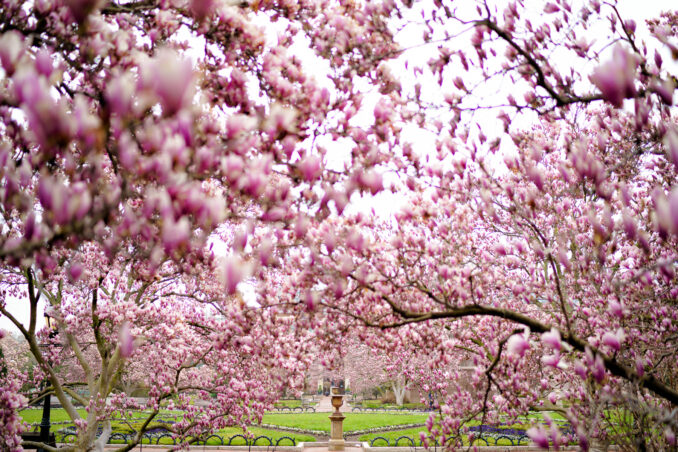 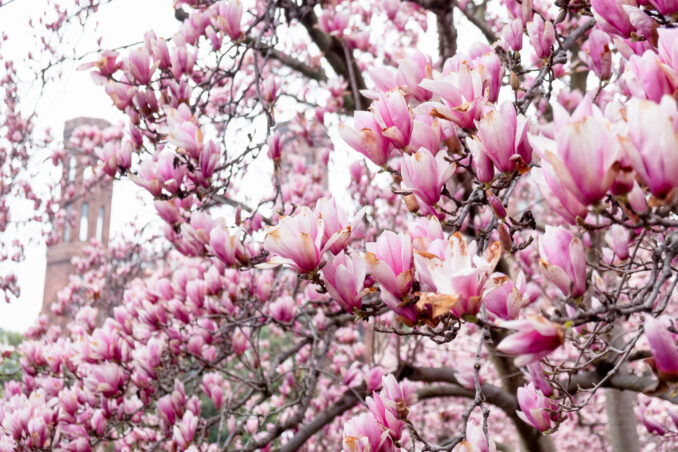 The Maine Ave parking lot (near the paddle boats) is still closed for parking to make way for the Welcome Area. It’s scheduled to remain closed until April 1, but given the late bloom I’d expect the Welcome Area’s residency to be extended.

The special one-way traffic restrictions are in place along Ohio Drive, so you can’t enter down by the John Ericsson Memorial (the Lincoln Memorial end). Instead, you’ll have to do the circuit around the Jefferson Memorial. You can still park there, although during the day you’ll be battling for spaces with all the tour buses bring school groups on spring break.

I’ve been tracking this specific cluster of buds/flowers for a couple of weeks now. Here’s the latest shot. This tree is by the FDR Memorial. You can see it standing out in one of the wider shots above.

I highly recommend the magnolias behind the Smithsonian Castle right now. They’re looking beautiful, and the way they hang low makes them an especially nice backdrop for portraits.

Looking for travel stock photos or prints? I might be able to help. You can search my collection here:
If you already have a buyer account with Alamy and would prefer to use that, you can search my images directly here.
839shares