UPDATE: The National Park Service has determined that 70 percent of the cherry blossoms have reached the “extension of florets” stage as of today.

The slow trickle continues. It’s becoming a little easier to find some scattered flowers out this morning, but most of them aren’t there yet.

It has been sunny and clear over the weekend, and continuing today, making for pretty spring weather. But it’s still unseasonably cool. So far for March we’re averaging 4 degrees below normal. According to current forecasts, there are some milder temperatures coming later in the week. If those arrive, it will help inject some energy into the cherry blossoms’ progress.

In case you missed the updates on Friday, both the National Park Service and the Washington Post‘s Capital Weather Gang pushed their peak bloom predictions back again. Both now predict peak bloom to fall between April 8 and 12.

You can find more details here.

It’s good news for those running in the Cherry Blossom 10 Miler on April 8.

With the new changes to the peak bloom forecasts late last week, I’ve been getting a lot of people asking whether there’ll be flowers to see on such and such a day.

So here’s a broad outline of what we can expect. But first, one important thing to bear in mind with all of this is that you don’t have to be here right on the peak bloom day to see a wonderful spectacle. “Peak bloom” is a technical determination that refers to 70 percent of the Yoshinos being out. But there are flowers to see in the days before and after that. Personally, I actually prefer them 2 to 3 days after peak bloom when they’re starting to turn pink and still looking lush. So if you miss the specific peak bloom day by a day or two, it certainly doesn’t mean you’re missing out on the spectacle.

Right now, there’s a very small number of flowers out. You really have to go hunting for them, but they are there. But as you can see from the photos below, it’s still a long way from the grand spectacle we heading toward. If you haven’t yet made plans to visit or have flexible plans, I’d hold off on visiting for a while yet.

Between now and peak bloom, more and more flowers will be coming out each day. In these cool temperatures, it’s barely a trickle. If milder temperatures come later in the week, as they’re currently expected to do, it will speed things up some.

So if you’re planning to visit this coming Easter weekend, you can be confident that there will be at least some flowers out. It’s impossible to say just yet what “some” will look like. It will be more than today, but is still likely to be a relatively small proportion (remembering that we’re talking about thousands of trees). But you’ll be able to find some without much trouble. While most of the trees are further behind, there are quite a few that aren’t far from flowering and might be tipped over the edge with some warm days later this week. I’ll be posting more updates through the week and include updated tips on where you can find blossoms on the weekend.

The spectacle will keep building as we head closer to peak bloom. From the wide range of development stages the trees are currently in, it looks like it might be quite a drawn out blooming process rather than a sudden explosion of flowers.

A day or two after peak bloom the flowers will gradually turn pink and their numbers start to diminish. They can hang around a week or more in the right conditions (cool, dry, calm) but hurry out more quickly if its warm, windy, rainy, or stormy. And spring weather around here is a real mixed bag, so we could end up with any combination of those. I’ve put together a photo timeline using photos from past years that give some idea of what you can expect to see, when.

The special one-way restrictions along Ohio Drive are now in place. So you can’t enter down the Lincoln Memorial end–you have to go around the Jefferson Memorial.

The Maine Ave parking lot (next to the paddle boats) is closed to parking and is where the Welcome Center is set up. The original schedule was for the Welcome Center to stay until April 1. I haven’t yet seen an official announcement, but I suspect that in light of the new peak bloom forecasts it might be extended.

How Things Look This Morning 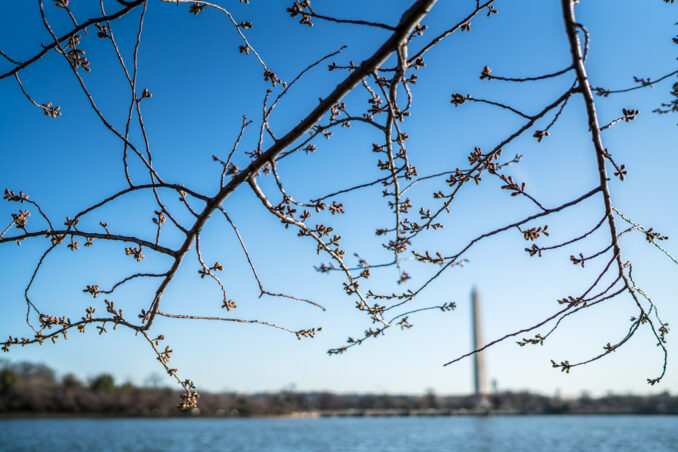 This is one of the old Yoshinos close to the MLK Memorial. 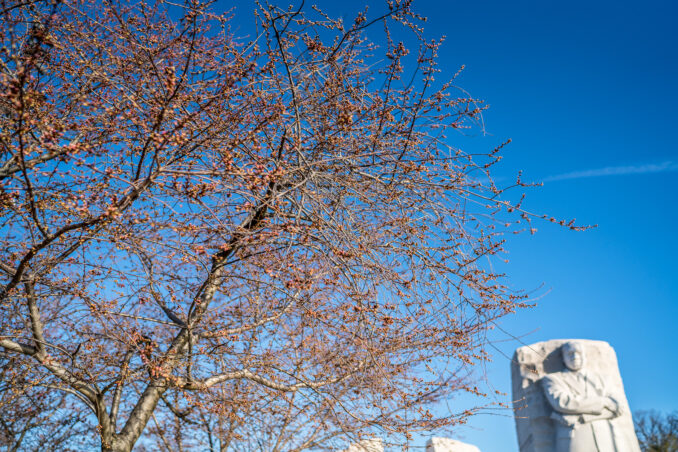 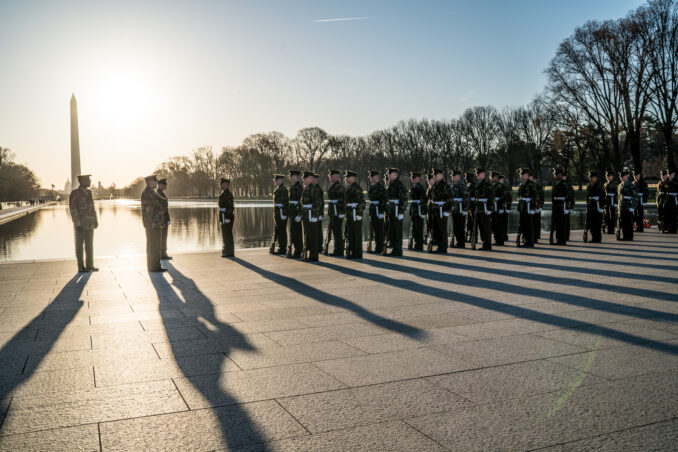 Marines practicing for the Marine Corps Sunset Parades. Because of renovations going on at the usual venue at the Iwo Jima Memorial, the Sunset Parades this summer will be held in the plaza in front of the Lincoln Memorial. Taken with a Sony a7rIII and a Sony Distagon T* FE 35mm f/1.4 ZA lens. 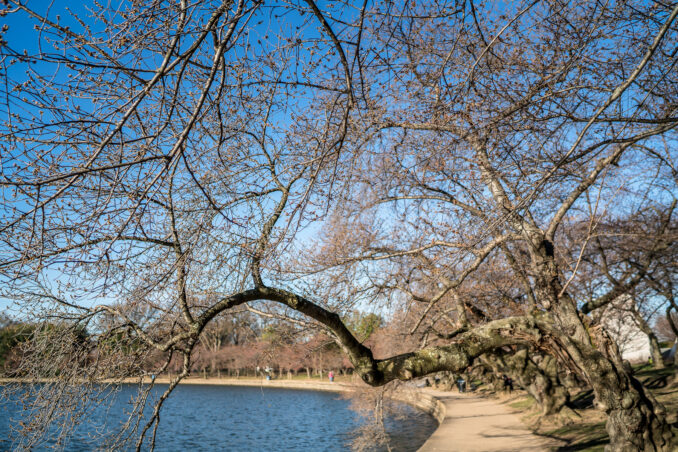 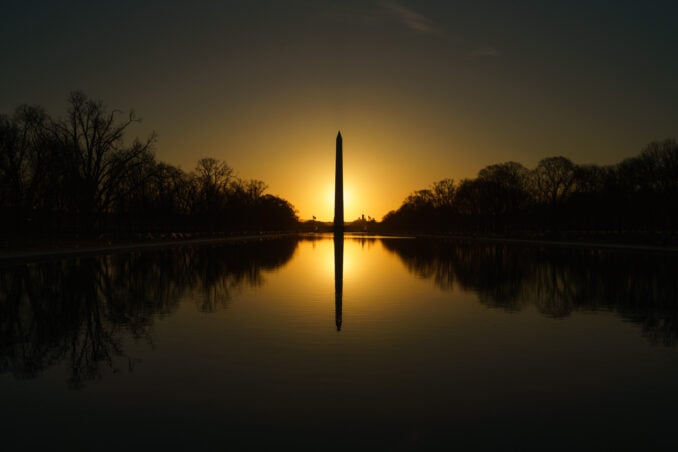 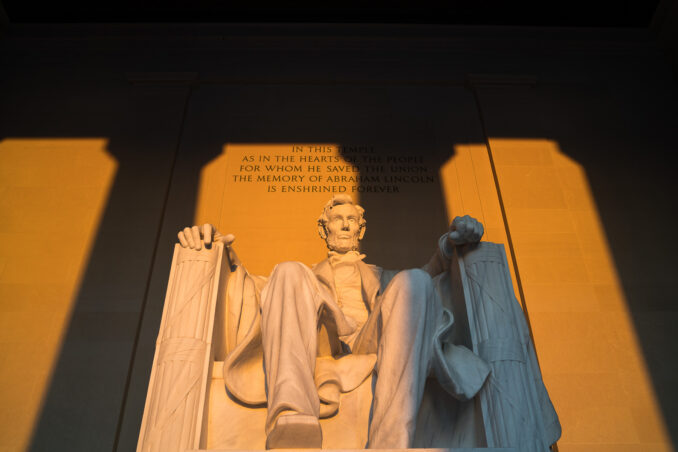 It’s still close enough to the equinox that the rising sun shines directly into the chamber and onto the statue of Abraham Lincoln on a clear sunrise. Taken with a Sony a7rIII and a Sony Distagon T* FE 35mm f/1.4 ZA lens.

If it looks like there’s two giant spotlights shining onto the Lincoln Memorial, it’s because it basically is. One is the sun itself, which because it’s still around the equinox and the sun is rising close to directly east, shines directly into the chamber onto the statue. The second light source is the sun’s reflection off the very still Reflecting Pool. Which is why you get those unusual shadows. Taken with a Nikon D810 and a Sigma 105mm ƒ/2.8 macro lens.

One of the trees near the Japanese Pagoda. 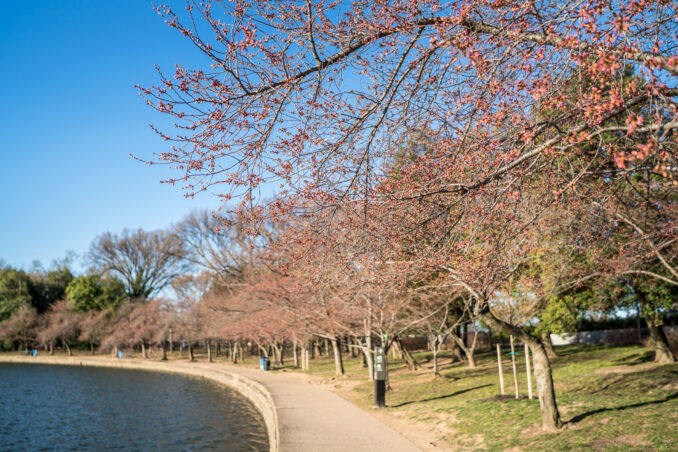 There are several varieties of cherry blossoms around the Tidal Basin area. The most famous and numerous are the Yoshinos, but there are a few varieties that bloom just a little ahead of them such as Weeping, Afterglow, and Okama cherry trees.

Here are some examples from this morning. 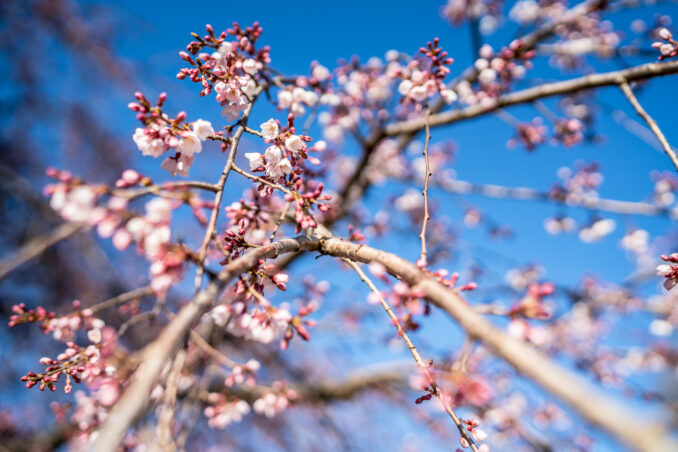 And to give a sense of progression, here’s a specific cluster of flowers on a tree near the FDR Memorial that I’ve shot several times recently. I’ll aim to follow these particular flowers in the coming days.

And stay tuned for my upcoming hands-on reviews of the brand new Sony A7III as well as the Sony A7RIII, both of which will be posted on my main site havecamerawilltravel.com.

Looking for travel stock photos or prints? I might be able to help. You can search my collection here:
If you already have a buyer account with Alamy and would prefer to use that, you can search my images directly here.
623shares