It has been snowing steadily, and there’s a layer of wet, slushy snow around the Tidal Basin.

But if you’re concerned that we’re seeing a repeat of last year, don’t be. The cherry blossoms are fine. It’s not cold enough to do damage, and nearly all of the trees are still in the earlier bud stages when they’re not really vulnerable to frost. Last year was different for two reasons–it was much colder (teens and low 20s over a few successive nights) and the buds were much further along in the vulnerable stage right before flowering. There are still some cold temperatures expected over the next several nights, but they shouldn’t cause any real problems.

As usual, the banks of the Tidal Basin don’t have quite as much snow accumulation as even nearby suburbs. There’s maybe an inch, and it’s very slushy. Part of the reason is that the water tends to moderate temperatures a little and keep them just a few degrees higher than some other nearby areas.

The cool temperatures mean that it’s still very slow going for the buds, although when you look very closely you can see some progress. There’s a small handful of scattered trees now starting to pop a few flowers. The cool temperatures that are expected through the weekend and into the beginning of next week will keep things moving at a snail’s pace. Current forecasts expect things to start warming up in the middle of next week, which will help things move along.

If you’re heading down to the Tidal Basin this weekend, it is possible to find a few cherry blossoms out, but not many. It’s a tiny proportion so far, but they’re there if you really go hunting. The vast majority of the trees won’t be out this weekend. I aim to post another update on Friday in which I’ll go into more detail on where to go looking for the few that are out, so be sure to check back then.

How Things Look This Afternoon

Here’s a sense of how things are looking down at the Tidal Basin and nearby areas this afternoon (and some of the fun people have been having in the snow). 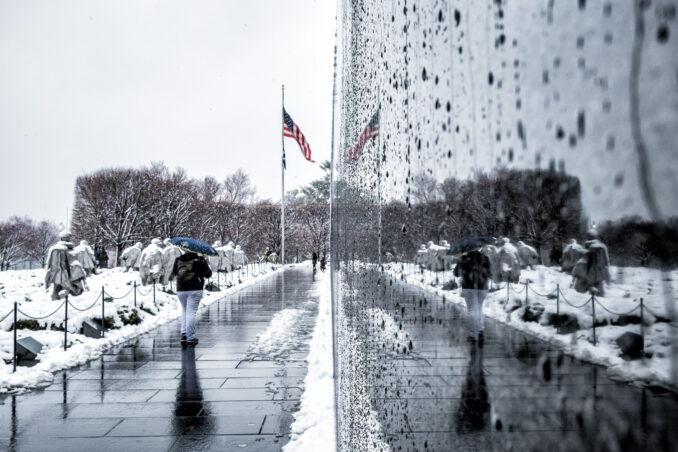 The Korean War Veterans Memorial. Taken with a Fujifilm X-T2.

This is an old cork tree, not a cherry tree. But it has some pretty interesting branches. 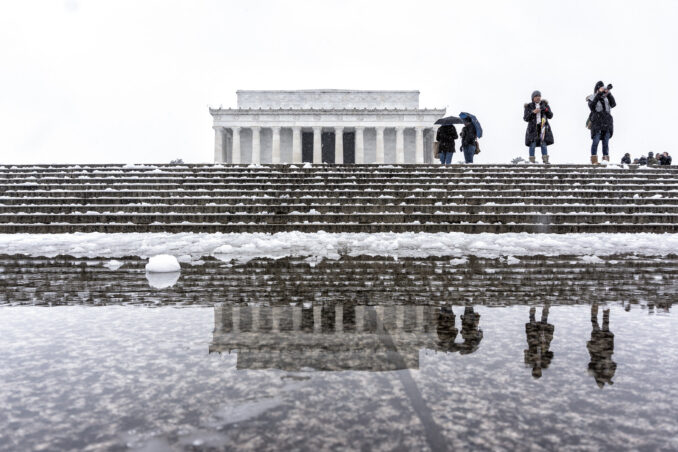 JFK Hockey Fields next to the Reflecting Pool and Korean War Veterans Memorial. 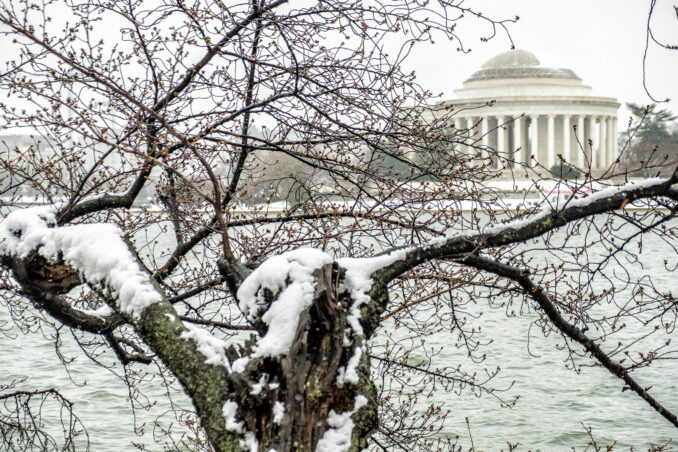 Next to the Reflecting Pool.

Looking for travel stock photos or prints? I might be able to help. You can search my collection here:
If you already have a buyer account with Alamy and would prefer to use that, you can search my images directly here.
668shares