It’s another beautiful morning at the Tidal Basin, and since yesterday it has become much easier to find flowers starting to pop. 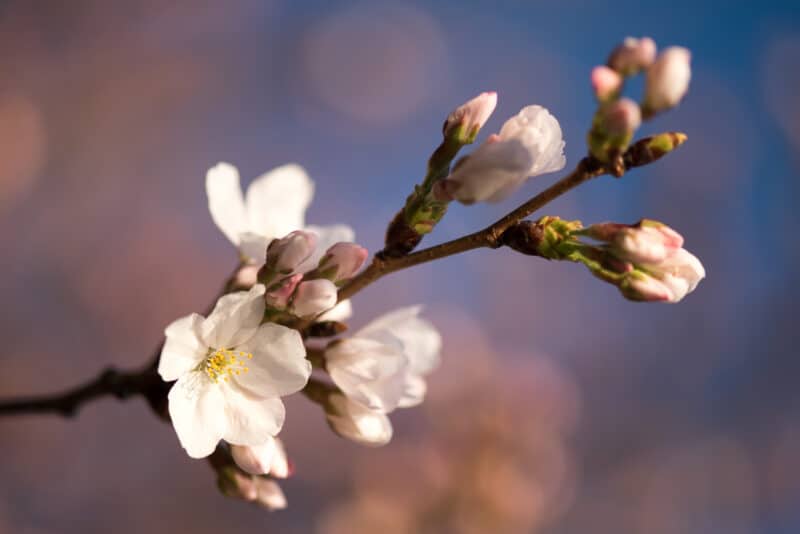 Even just in the 24 hours since the last update it has become much easier to find flowers out. It's still a very small minority of trees, and on most of those trees (with some exceptions) it's still only a very small number of flowers. But if you're heading down over the weekend and braving the weather you won't have much trouble finding at least some cherry blossoms out.

Not every tree is on the same schedule, but most of the trees are somewhere along the “peduncle elongation” stage to the “puffy white” stage. It wouldn't surprise me if the NPS announces later today that we've reached the “peduncle elongation” stage. That's good news in terms of the flowers coming out soon, but no so good news in terms of their vulnerability to potential frost in the next few days.

It was just about as perfect a morning as you can ask. Perfectly clear, very still, and with just the right amount of chill in the air. It all made for a glorious sunrise. We're still technically a couple of days from the spring equinox, but the sun is rising right at 90° today and tomorrow, which means it's lining up directly down the Mall. It also means that it's one of only a few times of the year that Mr. Lincoln gets to watch the sunrise directly (ie. the statue in the Lincoln Memorial sees direct sunlight). The Tidal Basin at sunrise is pretty special, but watching from the steps of the Lincoln Memorial on a clear morning at this time of year is hard to beat.

Yesterday I tried to answer some common questions I've been getting. My answers remain basically the same. But here are some slightly tweaked versions.

Which Weekend Is Best To Visit?

My suspicion at this point is that the peak bloom might end up splitting the weekends. But the weekend of March 26-27 (Easter) is shaping up to be the better weekend to see cherry blossoms out. It's also likely to be crowded–it's Easter weekend and with many schools on spring break.

But it's still not entirely clear when the trees are going to be in full bloom. The complication is that we've got a cold snap on its way and it's hard to know how hard that will apply the brakes. If the forecast was for more warm, sunny days like this, it would be much easier.

If the peak bloom comes midweek, both days might still end up being wonderful viewing, but Saturday is the safer bet simply because it's closer to the peak bloom. The further you get away from peak bloom, the greater the risk of fewer flowers. This timeline illustrates what I mean. If the cold weather puts the brakes on enough for the peak bloom to be pushed back to Friday or Saturday, viewing will almost certainly be excellent on both days of the weekend and even potentially into the beginning of the following week.

If you decide to brave the weather this weekend, yes, you'll be able to find cherry blossoms out. The vast majority of the trees aren't blooming yet, but there are some scattered around that are starting to have flowers. A lot more have popped out even since yesterday morning. Another warm, sunny day today will help convince even more to come out to play. All of the photos of the flowers below are from around the Tidal Basin this morning.

More and more will come out in the coming days, although the pace might slow quite a bit when the cold weather arrives. There should be a few more flowers out on Sunday than Saturday simply because it's further along the progression.

Around the Tidal Basin, the indicator tree is the safest bet (here's how to find it). It's in full bloom at the moment (see photos in yesterday's update). Unfortunately it's not ideal to pose with for family photos or selfies because its branches are pretty high up.

There are also some cherry blossoms blooming along the Potomac (Ohio Drive). If you're looking for some, there are a couple next to the boat landing near the FDR Memorial (here's how to find it). I have some photos of them in yesterday's update.

If you're planning to take some portrait photos and want flowers in the background, the tulip magnolias at the George Mason Memorial and behind the Korean War Veterans Memorial are looking magnificent.

Will Snow/Rain/Frost Affect the Cherry Blossoms?

My answer yesterday was that I don't know how the cold snap is going to affect the trees. Since then, the experts at the NPS have also spoken about it. It boils down to “maybe.”

The gist of it is this: Snow itself shouldn't be a problem, but the cold temperatures that come with it might be. When the buds are in the “peduncle elongation” development stage they're vulnerable if a hard frost forms. And unfortunately, a lot of the buds are in or near the “peduncle elongation” stage now. But there's really no way to predict if the conditions are going to end up being conducive to frost forming. If it does form, it can damage or kill the buds. In a severe case, according to the NPS, “A late frost can prevent the trees from blooming at all.” I'm not aware of that ever happening to DC's cherry blossoms–it certainly hasn't happened anytime recently.

Naturally, I'll be keeping a close eye on it and updating as necessary.

All of these were taken around the Tidal Basin this morning. (I'm referring to the ones of the flowers, of course, not the ones of the sunrise from the Lincoln Memorial).

None of them is of the indicator tree, which is in full bloom at the moment. I have photos of it in yesterday's update. The ones here with flowers open are all on other trees that are around the Tidal Basin itself.

This should give you some sense of what you can expect to find if you head down to the Tidal Basin today or over the weekend. 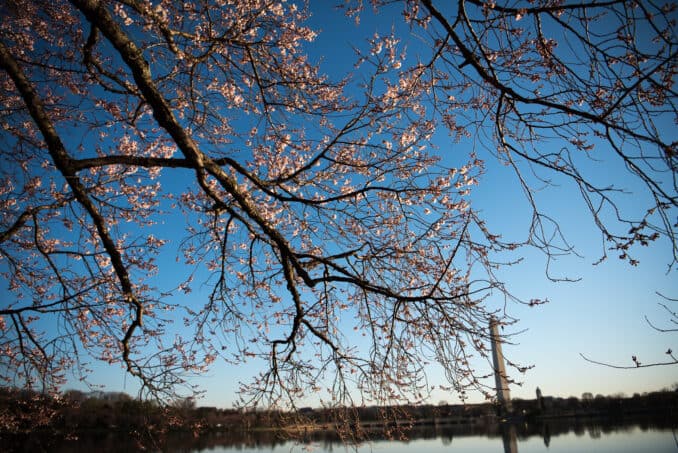 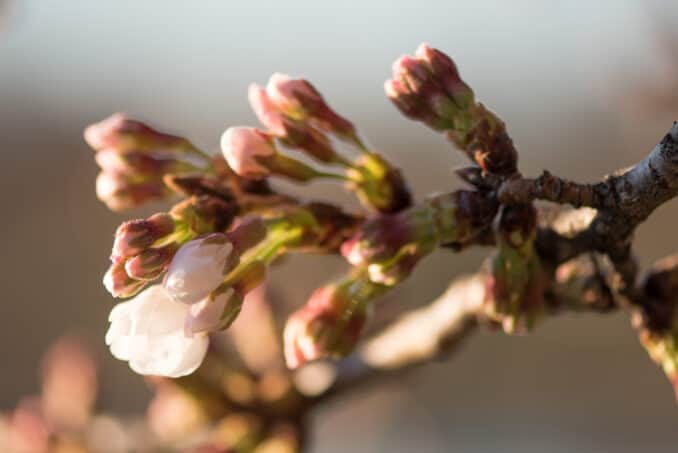 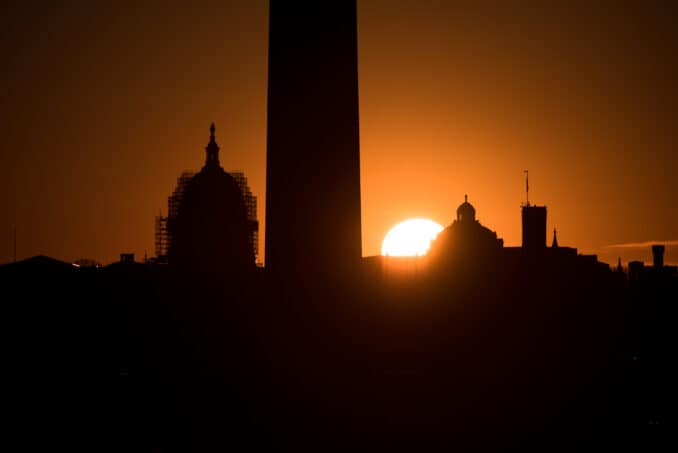 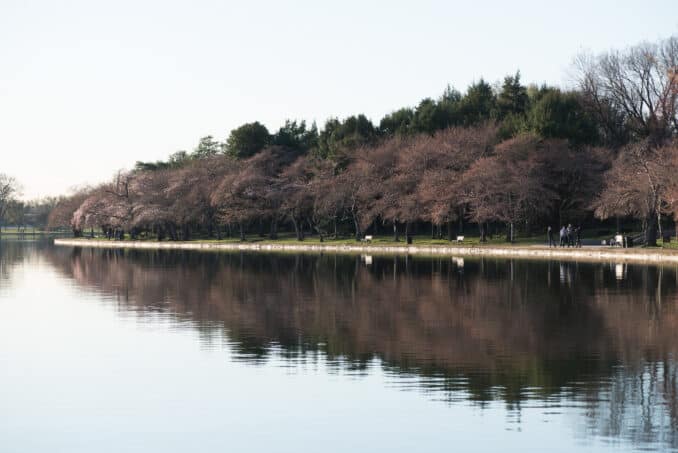 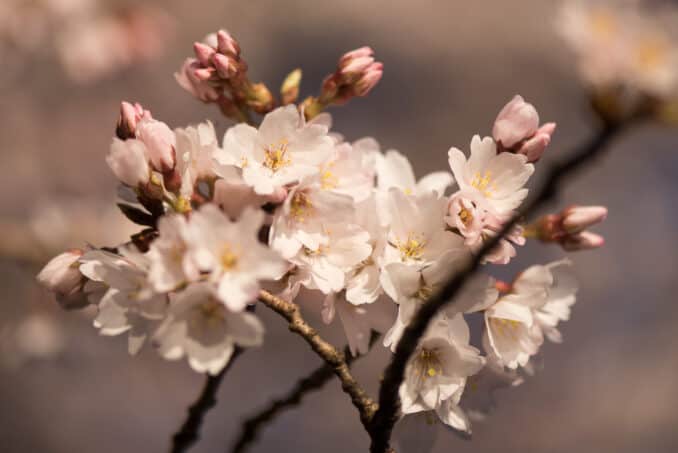 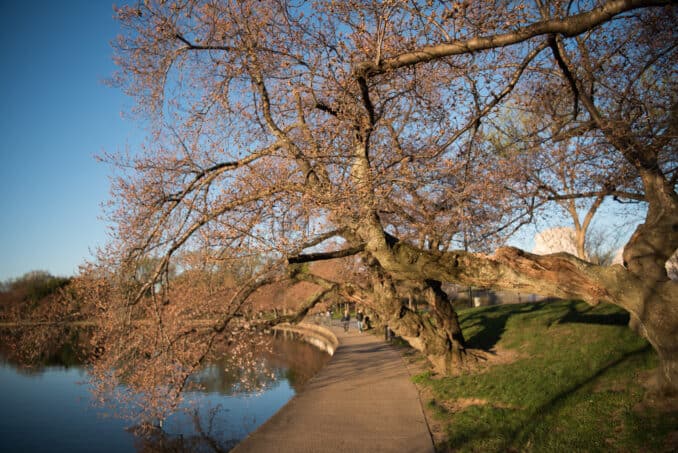 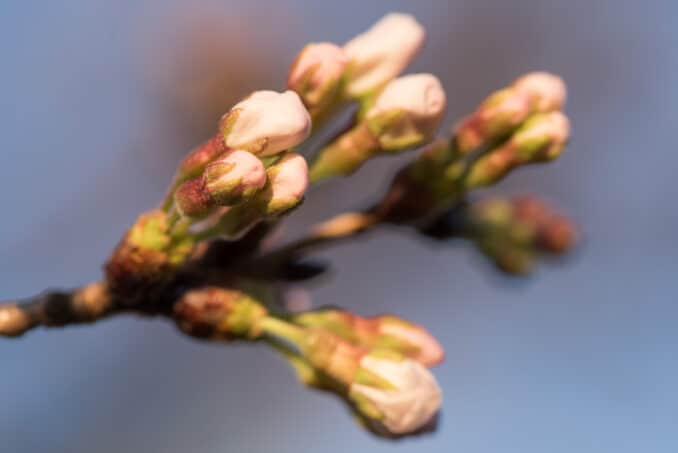 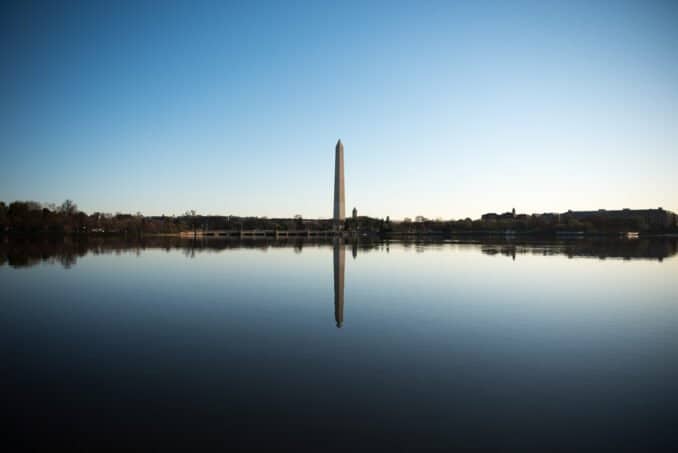 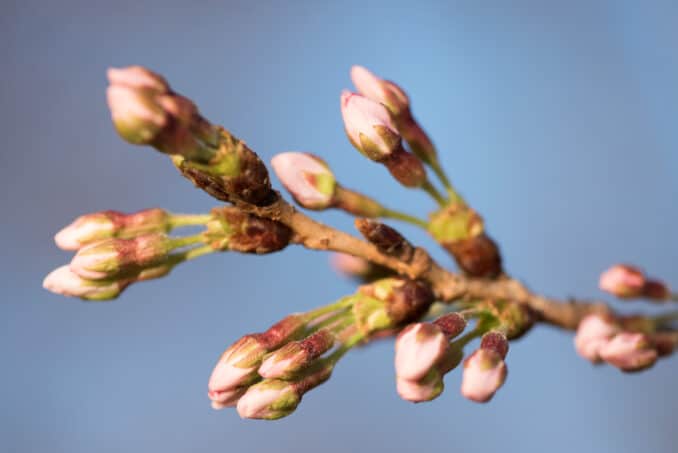 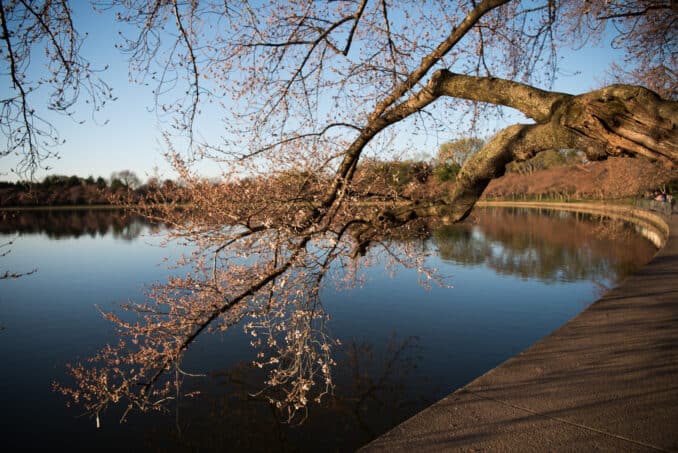 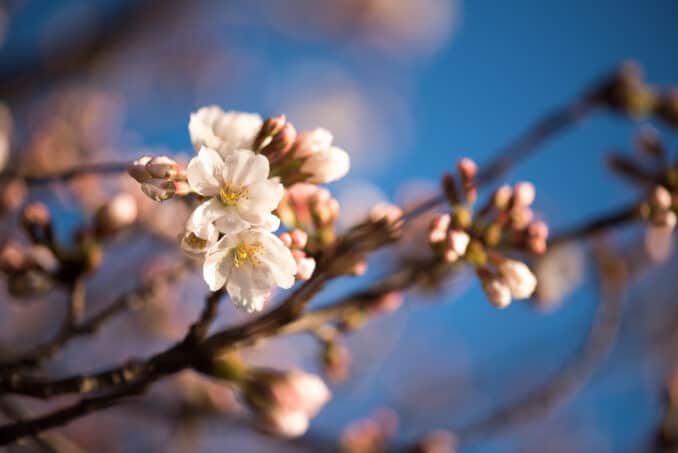 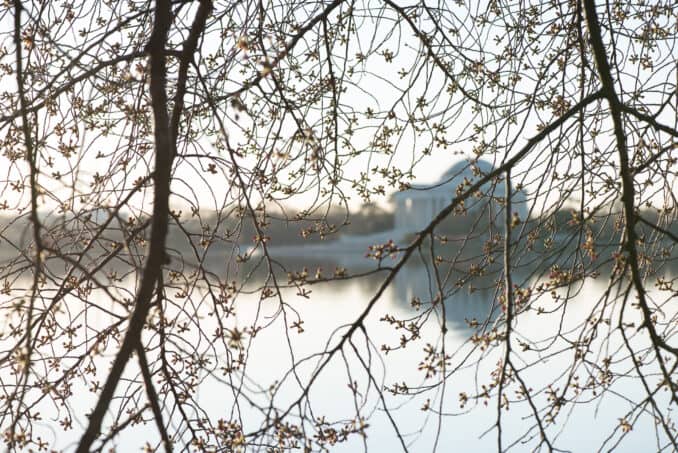 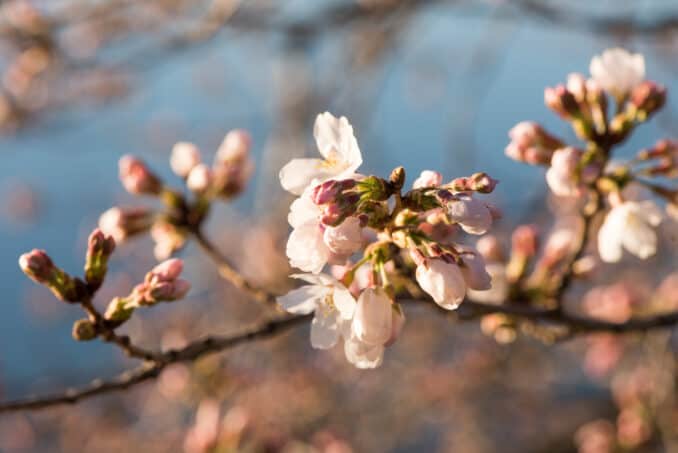 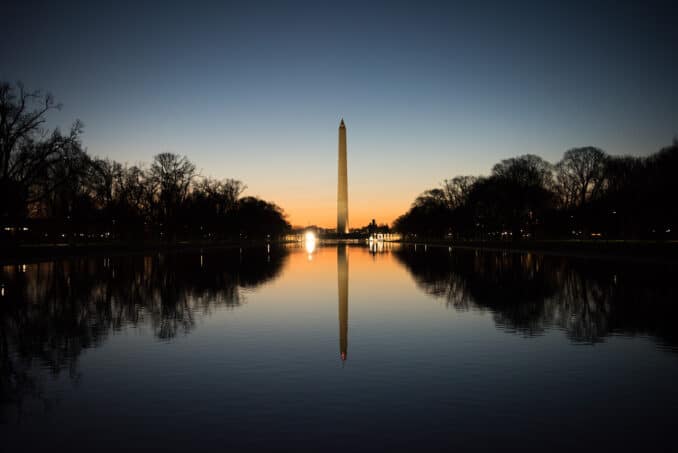 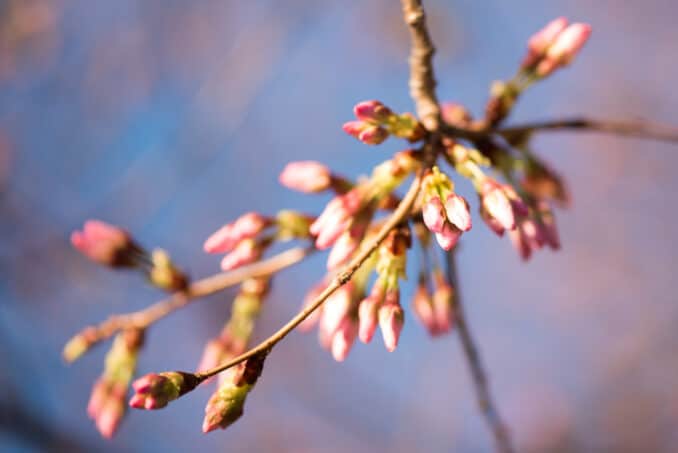 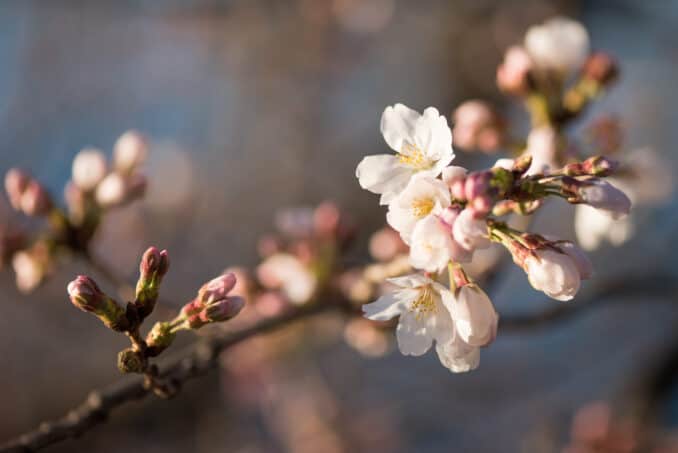 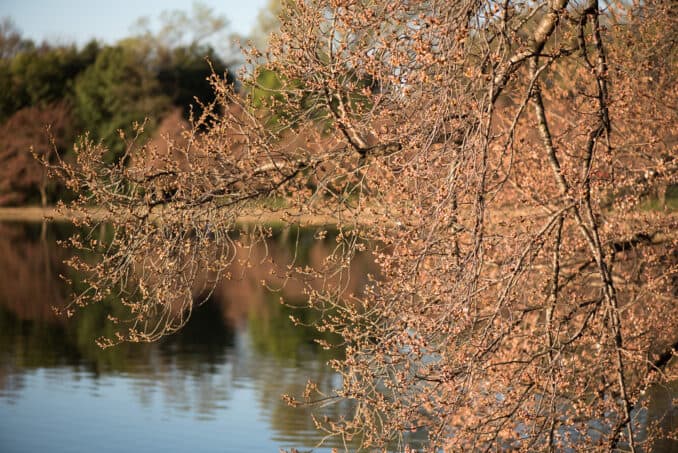 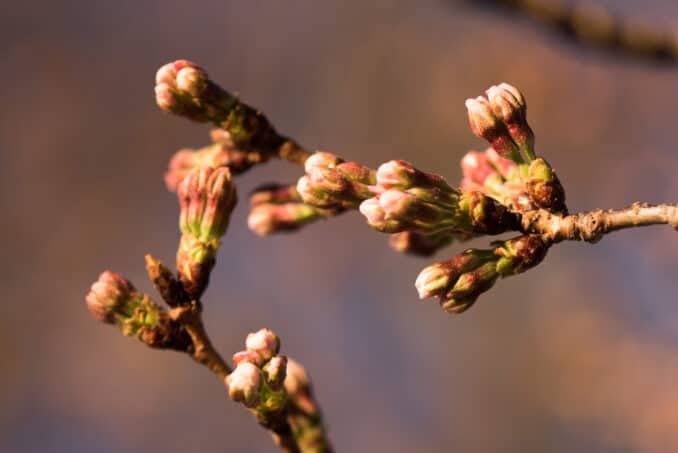 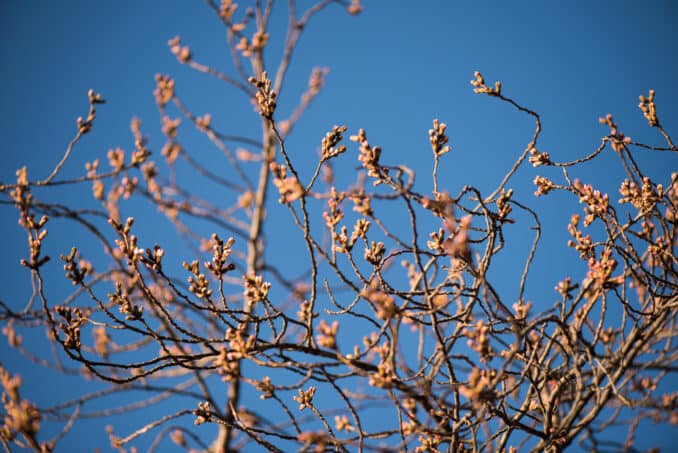 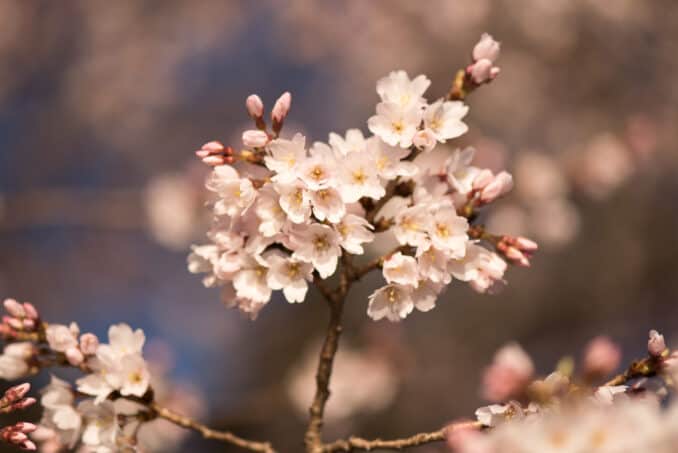 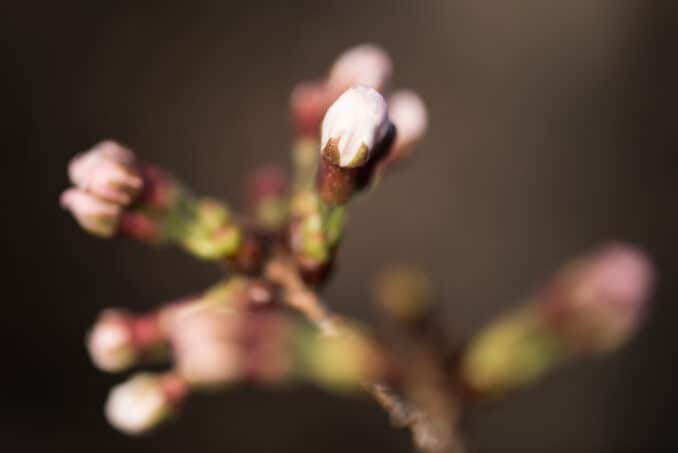 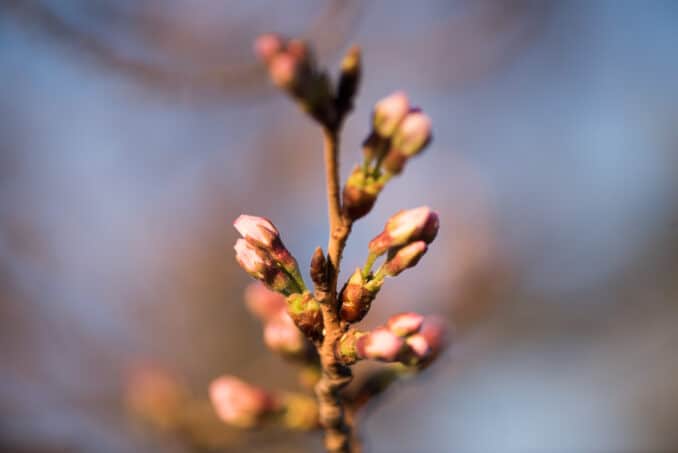 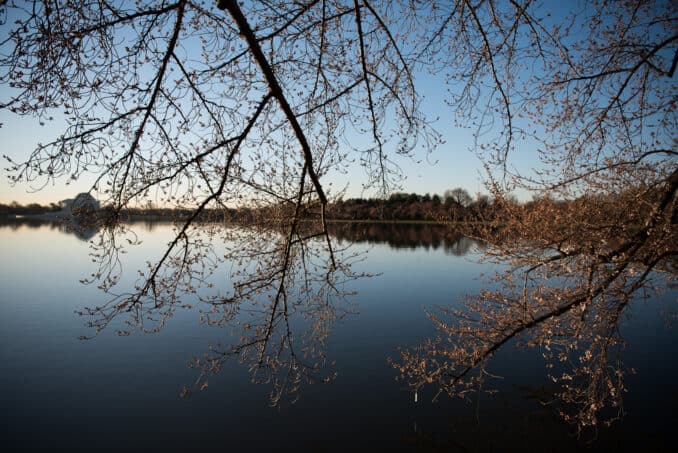 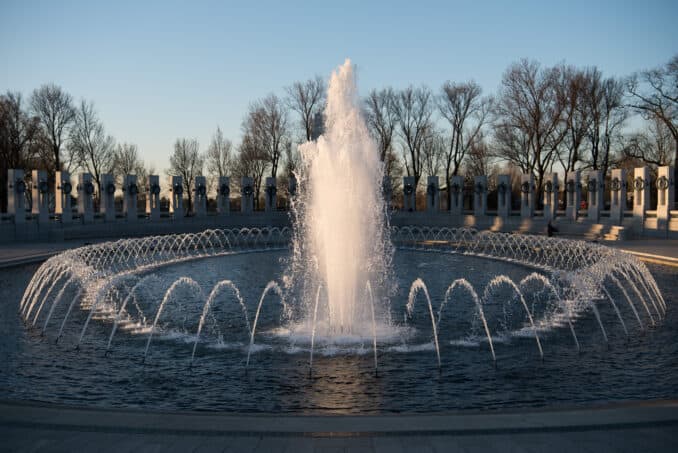 They're still out of action. 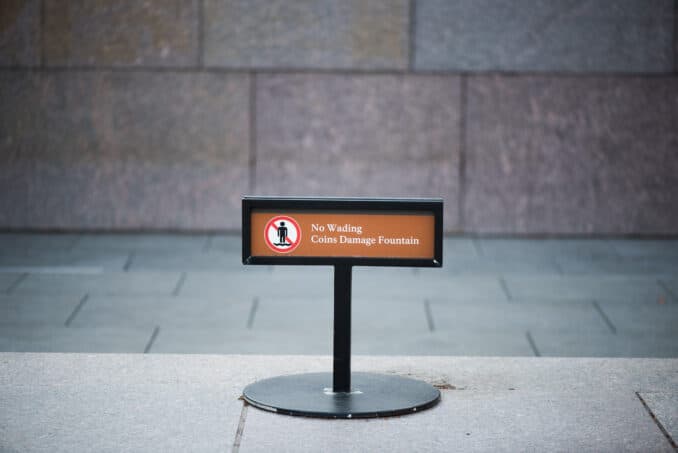