The National Park Service has announced their peak bloom prediction: March 17-20. That would make for a very early bloom. You can find more information, including explanations of what it means and what to expect, here.

Around the Tidal Basin this morning, the buds are clearly making progress. And, as usual, the so-called indicator tree is marching ahead of the others. It’s typically a week to 10 days ahead.

Stay tuned for the National Park Service’s peak bloom prediction to be announced at a press conference later this morning. I’ll post an update when they announce it, and you can of course always find the latest predictions on the peak bloom page.

The National Park Service will be announcing their peak bloom forecast later this morning.

The Washington Post‘s Capital Weather Gang posted their own peak bloom prediction a few days ago. They’re predicting that peak bloom will come “during the window between March 23 and 27 this year, centered on the 25th.”

As always, you can check in with the peak bloom page to get the latest forecasts.

February closed out 6.3 degrees above average. That’s what has helped the cherry blossoms, along with the area’s other flowers, get a jump start on spring.

Here’s how we’ve been tracking for the winter compared with the previous few years.

Here are some photos taken around the Tidal Basin this morning. 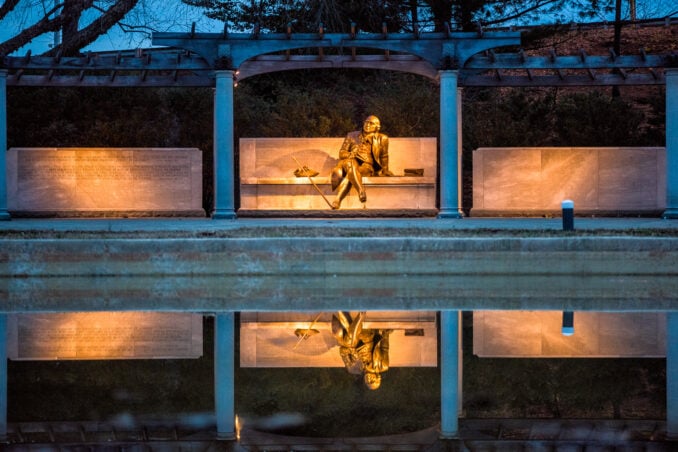 The George Mason Memorial. There some renovation work being done at this memorial, but so far it’s off to the side.

The so-called indicator tree is one that is consistently about a week to 10 days ahead of the others. I have more information in it, including on how to find it, here.

This time last year it was already blooming. Here’s how it was looking this morning.

The indicator tree is, as usual, ahead of the others.

If you’re coming from out of town, I’ve put together some suggestions on where to stay.

The March for Our Lives rally on gun control is scheduled for March 24, 2018. That coincides with the first week of the National Cherry Blossom Festival.

The rally’s organizers are planning for up to 500,000 people to attend. While DC handles big events in its stride, that’s likely to create a lot of competition for hotel rooms that weekend. So if you’re planning to come into town then, it’s probably best to book sooner rather than later.

B&H Photo has some really good deals at the moment on everything from cameras and lenses to tripods and lighting. These are running through March 3 to coincide with the WPPI conference.

Looking for travel stock photos or prints? I might be able to help. You can search my collection here:
If you already have a buyer account with Alamy and would prefer to use that, you can search my images directly here.
1.3Kshares