It’s still too early to tell when the cherry blossoms will reach peak bloom this year, but here’s a quick rundown of where we’re at.

The average date for peak bloom is around the beginning of April, but it can shift up to a couple of weeks before or after that depending on the weather. Warm temperatures coax an early bloom, while cold temperatures delay the process.

After a pretty ordinary start to the winter, we’ve recently emerged from an extended cold spell that took temperatures well below normal. They’ve moderated now–and today reached positively balmy temperatures in the 50s–but as of this morning, January is still tracking at about 6.3° below normal for the month. As you can see from the

But itself, the cold stretch isn’t enough to tell us that the bloom will be early; the trees are in their standard winter dormant state, anyway. So we’ll still need to wait and see how the coming weeks shape up; the temperatures into March are far more important.

Long-range weather forecasts are notoriously unreliable, of course, but as of right now there’s doesn’t seem to be much suggestion of either sustained unseasonably cold or unseasonably hot temperatures in the coming weeks. In other words, as of now, we appear to be tracking roughly around average. Put another way, there’s not much to indicate at the moment that the bloom will be either early or late. Obviously, that could change.

How Does it Look Today?

The shot at the top of the page was taken this morning. The Tidal Basin is covered in ice and the cherry trees are hunkered down for the winter. There’s nothing really to see yet in terms of bud development.

This is another shot from this morning:

None has been issued yet. The two to watch, by the National Park Service and the Washington Post‘s Capital Weather Gang, are typically issued sometime around the first week of March.

As always, I’ll keep the peak bloom forecasts page updated as we head into the bloom.

This isn’t going to be a pressing issue for most people right now, but I may as well give a heads up on it. All of the free parking around the Tidal Basin (and much of the National Mall, for that matter) isn’t free anymore. It has been converted to metered parking with time limits ranging from 2 to 3 hours. This applies to all the street parking lining Ohio Drive near the Tidal Basin and the three lots (A, B, C) under the foot of the Fourteenth Street Bridge. I have more detailed information on the parking situation here.

If you’re desperate for at least some cherry blossoms, you might catch some of a different variety with some scattered flowers. There are quite a few of these trees around the base of the Washington Monument, although their fall/winter bloom is nowhere near as impressive as the spring bloom.

Here’s an example I shot in early December: 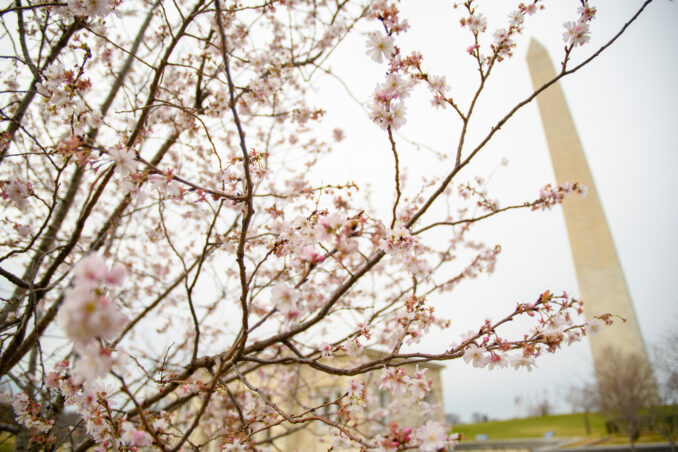 I have more about these fall/winter blooming cherry blossoms here.

You can find more details on the official festival website.

Finally, a thank you to Joe Brooks for creating the new 2018 graphic on the front page. You can find more of her wonderful work on her website.

Looking for travel stock photos or prints? I might be able to help. You can search my collection here:
If you already have a buyer account with Alamy and would prefer to use that, you can search my images directly here.
686shares