The thunderstorms never arrived, and there didn’t end up being much rain. The wind did come, with some strong gusts measured just across the Potomac at Reagan National, but it hardly had any effect on the cherry blossoms. It did knock a few petals off, but surprisingly few, and it hasn’t diminished the spectacle one bit.

Round two comes Saturday with some more wacky spring weather, including the prospect of some accumulating snow.

The trees are in full bloom and, weather aside, it’s prime viewing now through at least the weekend. Here and there you can still find some trees yet to fully pop, but they’ll peak sometime in the next few days (probably sooner than later). There were lots of people out this morning enjoying the beautiful clear sunrise and crisp spring day. Tomorrow is shaping up to be cloudy but a bit warmer.

If you’re trying to decide when to go, purely in terms of flowers and ignoring other logistics, sooner will be a safer bet than later. While they can last a week or more after peak in the right conditions (cool, calm, dry), after they peak they start to become more fragile and vulnerable to rain and wind. And at least some of the weather forecasts I’ve seen suggest a possibility of rain early next week.

Further down this page are updates to weekend prospects, logistical information (including Cherry Blossom 10-Miler on Sunday morning), and, of course, new photos taken this morning.

You would have thought we’d be done talking about snow by now, but no. Weather forecasts are currently calling for some snow on Saturday. So the natural question is, will this be a problem for the cherry blossoms?

The best answer right now is “maybe.” It’s just impossible to predict exactly what’s going to happen. But I realize that’s not especially helpful, so let me offer some more explanation.

The issue isn’t really about temperatures. It’s not likely to get down to the kind of temperatures that cause freezing issues. So we (probably) don’t have to worry much about a repeat of last year.

The issue is one of fragility. Once the cherry blossoms peak they start getting more fragile and petals come off more easily. Rain and wind can knock petals off, and both together even more so. You can see some examples of what I mean here. The petals get more fragile each day that goes by. On Saturday they should still be close to peak and still relatively resilient. They’ll get less so as we move through Sunday and into next week.

It also depends on what ends up happening. Gentle, light, fluffy snow shouldn’t be much of an issue. Heavy, wet snow might be. And if there’s more rain than snow–a real possibility, especially when temperatures around the Tidal Basin are often slightly warmer than surrounding suburbs–that could be more problematic. So if tends towards heavy rain, that’s the least helpful scenario but also potentially the most likely (at least for some of the time).

So even if that doesn’t actually answer the question in the form of a prediction, hopefully it at least gives a sense of what to watch for. Naturally, I’ll be keeping a close eye on it and posting updates.

This weekend will be the prime cherry blossom viewing weekend. Expect big crowds. You’ll have to dodge the weather on Saturday and the Cherry Blossom 10-Miler on Sunday (more on that below).

Next weekend (April 14-15). It’s certainly possible there’ll still be flowers out to see, but the odds are leaning against it. They’ll be peaking sometime in the next few days, and as we move past the peak they start getting more fragile. There’s rain in the forecast early next week, and that is often chased by breezy conditions. Neither of those things is helpful for keeping the cherry blossoms around. To get a sense of what to expect in the days after peak bloom–and the large variation–take a look at this photo timeline.

There’ll be plenty more updates before then so we can see how they’re tracking, so it’s worth checking back.

The cherry blossoms are currently in their prime. 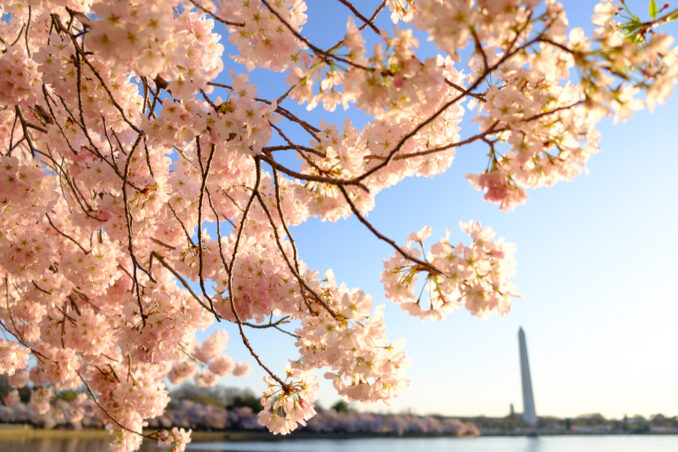 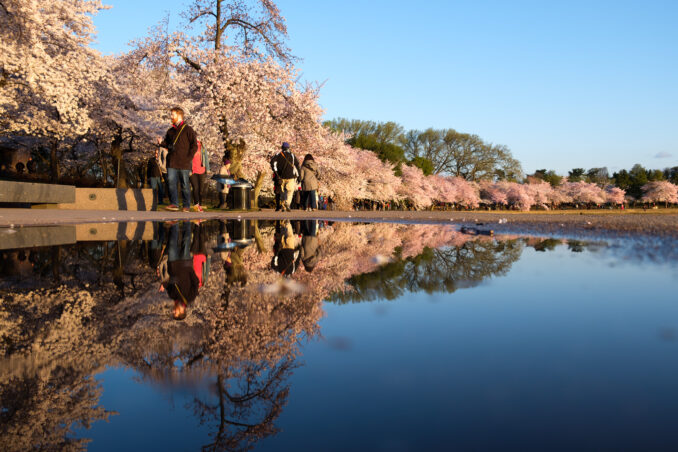 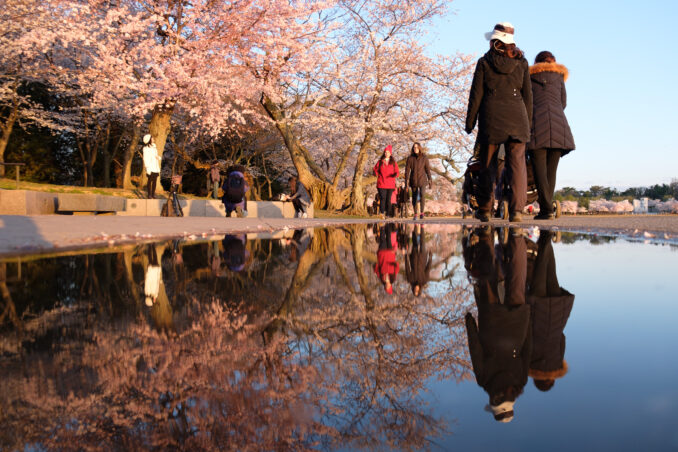 The Cherry Blossom 10-Miler is on Sunday morning. It typically sees about 20,000 or so runners and the course goes on the roads all around the Tidal Basin area and up around Hains Point.

The race doesn’t prevent access to the Tidal Basin, and you can still access the cherry blossoms on foot during the race. But it adds some logistical challenges to getting to and from there.

For one, there are significant road closures in the neighborhood of the Tidal Basin throughout Sunday morning. You won’t be able to park anywhere along Ohio Drive or Lots A, B, and C (or get to them in the first place).

Here’s a map of the road closures for this year’s race: 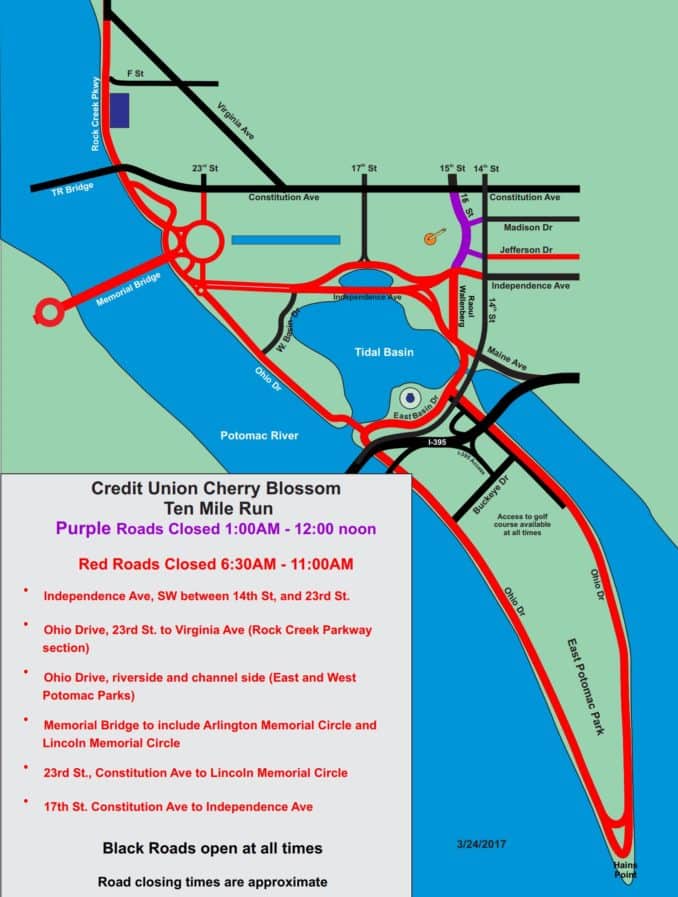 Metro will be the best way to get around downtown and then walking to the Tidal Basin.

For another, even when walking you might run into delays if you’re trying to cross the course. And please do be careful. There will be a lot of runners, many of whom have enough to contend with without trying to dodge pedestrians darting across in front of them.

The roads around the Tidal Basin are scheduled to reopen at 11am. You can expect traffic bottlenecks to last well beyond that as cherry blossom traffic picks up.

And if you’re running it, good luck! I’ve run it several times, and it’s a fun race.

As usual, I’ll be inviting reader photo submissions again this year. That will open sometime in the next few days. So if you’d like to share a couple of your favorite shots from this year’s bloom, stay tuned in the coming days on how you can submit them. In the meantime, you can see some of them from last year.

Looking for travel stock photos or prints? I might be able to help. You can search my collection here:
If you already have a buyer account with Alamy and would prefer to use that, you can search my images directly here.
1.1Kshares