The blossoms themselves are shaping up nicely for later in the week. We’ll just have to see how the incoming weather plays out. With luck, it won’t end up being much of a big deal, but there is some risk that the strong winds, especially after rain, might take a toll on the fully blooming trees. Right now they’re looking good and not showing any real signs of becoming fragile just yet (such as dropping petals).

Many of the trees are in full bloom now, but not every tree is fully out yet. There are still plenty to pop open. While the weather over the next few days might not be especially pleasant, it should at least be relatively warm. That will coax more flowers out. There’s a good chance we’ll see peak bloom around Thursday or Friday.

If you head down today you won’t be disappointed–the trees are looking beautiful (there are more photos from this morning below). But take a jacket this morning–it’s a cool breeze.

The trees obviously don’t care what day of the week it is, and it looks increasingly likely that peak bloom will fall towards the end of this work week. But the reality is that many people can only visit on a weekend, so I’ve been getting a lot of questions from readers asking about which weekend is best. Here’s a quick state of play. As usual, the further ahead we look the more uncertainty there is, and things can change quickly.

This weekend (April 7-8). In terms of the flowers themselves, this weekend is shaping up nicely. They’ll be in full bloom. But the weather isn’t cooperating. Firstly, there’s unsettled weather expected in the days leading up to the weekend. Heavy rain and strong winds that are expected midweek aren’t helpful as the flowers become fragile after they peak. It’s impossible to predict how much damage the weather will do to the blossoms before the weekend–we just have to wait and see. Hopefully it won’t have much impact. And then once we get to the weekend itself it’s shaping up to be cold and wintry, with some forecasts even saying there might be a decent amount of wet snow.

Next weekend (April 14-15). The way weather conditions are shaping up, the odds are reducing that there’ll be a lot left to see on this weekend, but there’s still very much a chance there might be some flowers left. There’ll be plenty more updates before then so we can see how they’re tracking, so it’s worth checking back.

These were all taken early this morning. It was cool, breezy, and very overcast. So not very pretty weather, but the trees make up for it. 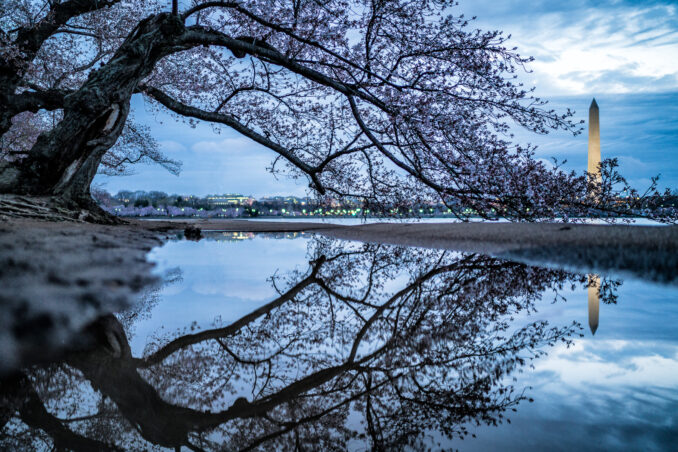 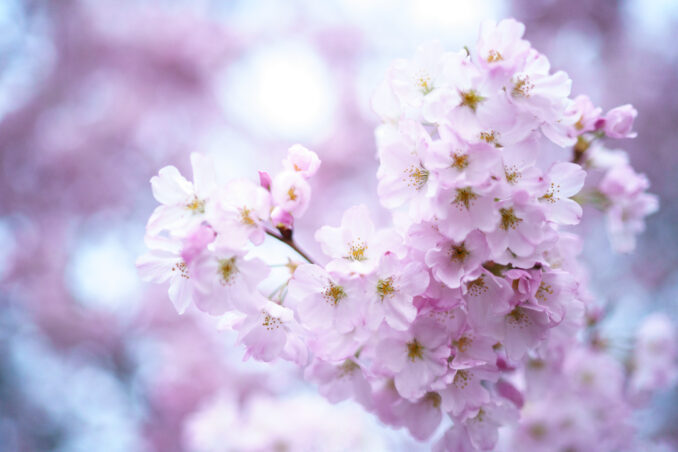 From inside the FDR Memorial looking towards the Japanese Pagoda and Tidal Basin in background. 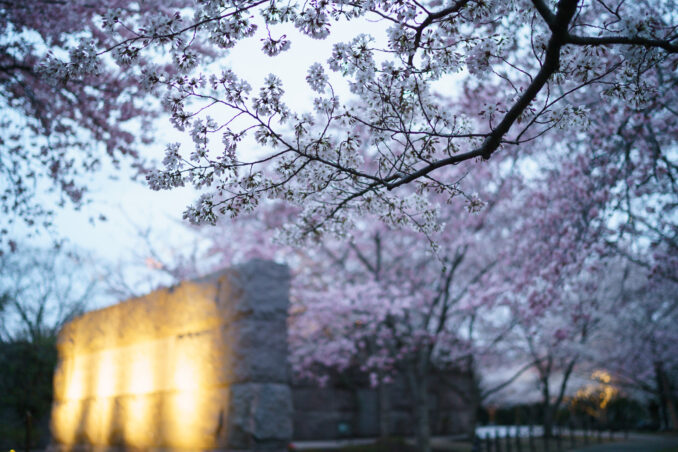 Another example that’s only partly blooming so far.

The Cherry Blossom 10 Miler is on Sunday morning. It doesn’t prevent access to the Tidal Basin, but it can add some logistical challenges to getting to and from there. I’ll have more details in coming days.

As usual, I’ll be inviting reader photo submissions again this year. That will open sometime in the next few days. So if you’d like to share a couple of your favorite shots from this year’s bloom, stay tuned in the coming days on how you can submit them. In the meantime, you can see some of them from last year.

Looking for travel stock photos or prints? I might be able to help. You can search my collection here:
If you already have a buyer account with Alamy and would prefer to use that, you can search my images directly here.
770shares