The National Park Service has restricted traffic and parking in the area around the Tidal Basin.

Welcome to the 2021 Cherry Blossom Watch! Spring is almost here!

It’s been a rough year, and things will be different, but the cherry blossoms will be blooming soon!

The National Park Service is expected to release their first peak bloom forecast of the season later today. So stay tuned.

Below you can find information about what you can expect from the Cherry Blossom Watch this year, as well as some photos of how it’s looking this morning.

How the Tidal Basin is Looking Today

It’s a soggy morning down at the Tidal Basin. There’s not much to see in terms of blooms–the buds are still tightly wrapped and have some work to do before they’re anywhere near blooming. By comparison, at this time last year the buds were much further along, which led in to a very early bloom. It won’t be that early this year.

Here are some photos taken this morning. 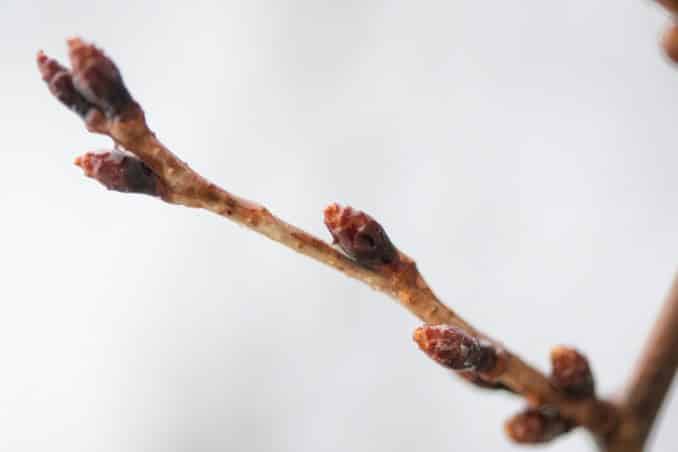 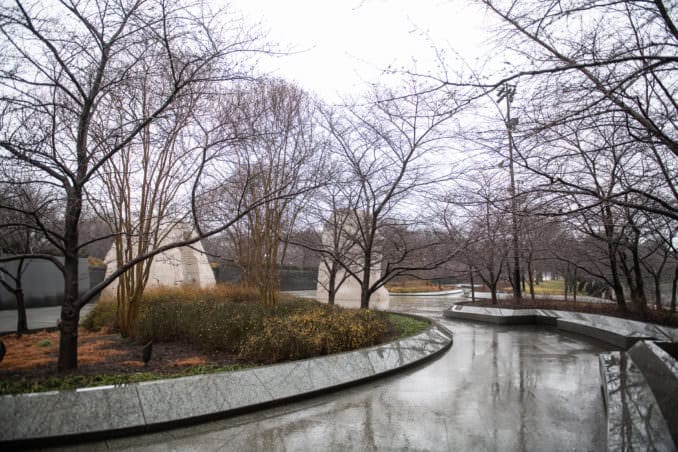 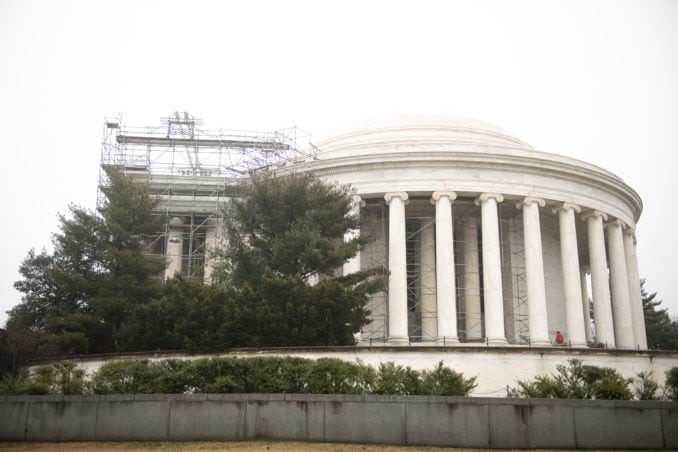 They’ve made good progress in the Jefferson Memorial restoration. The dome is clean, but there’s still scaffolding over much of the front half. 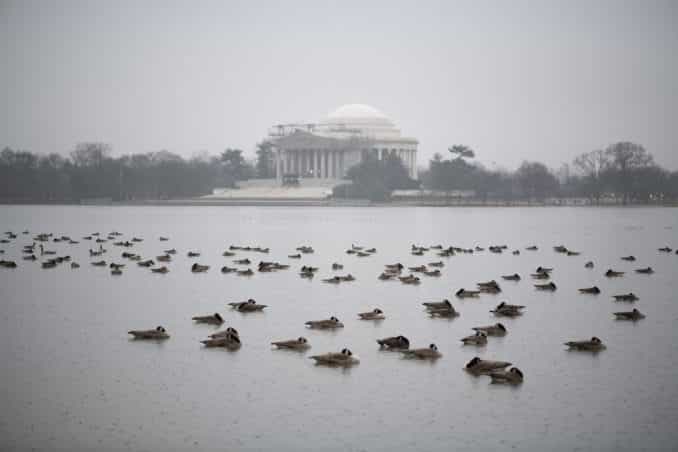 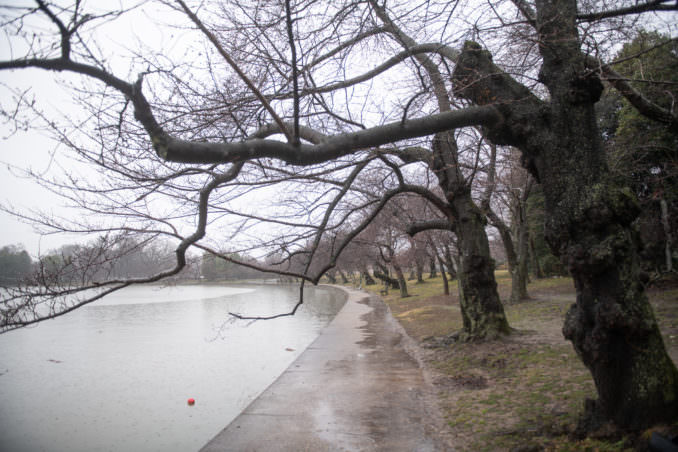 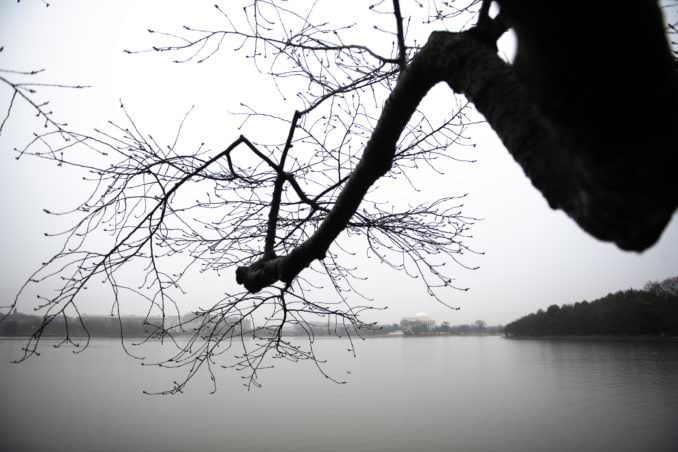 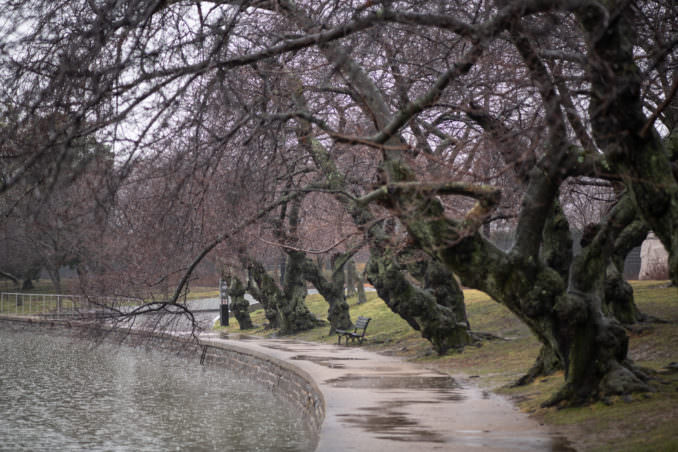 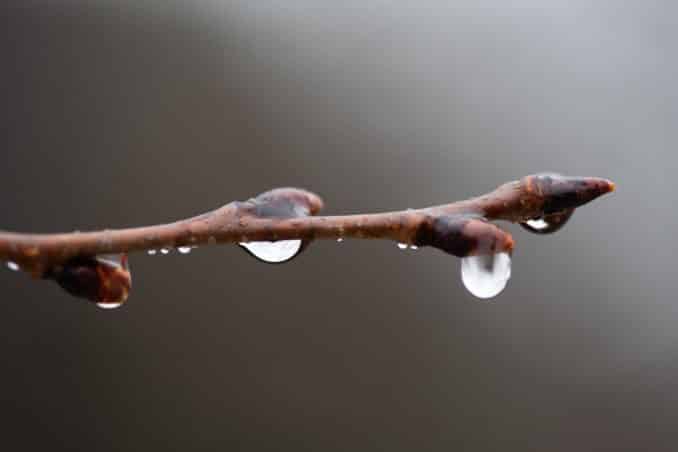 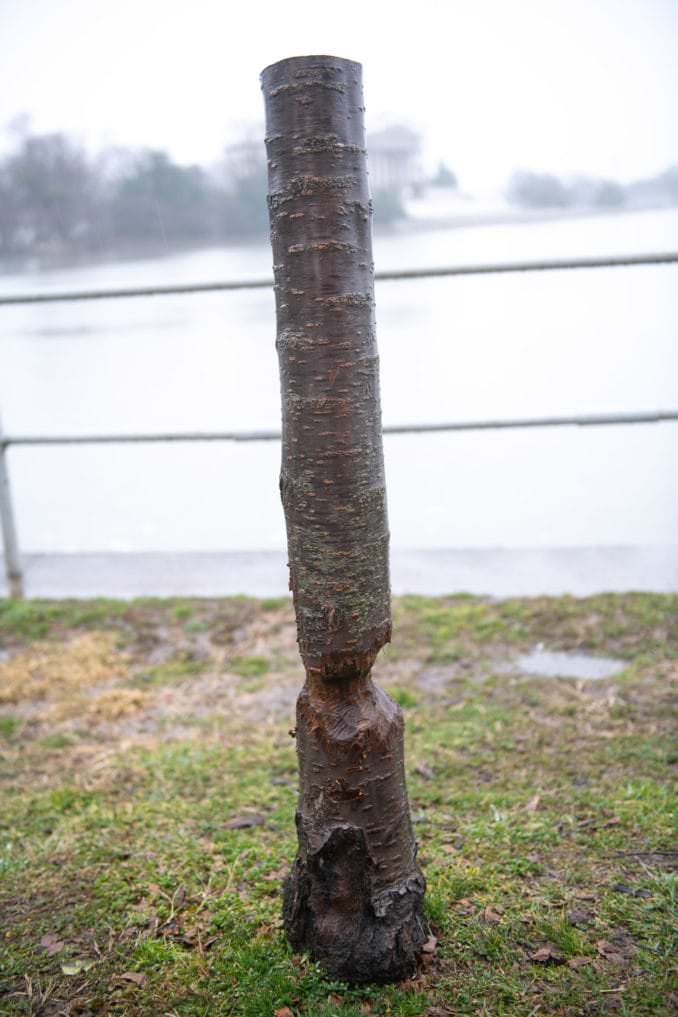 A beaver had recently taken a liking to this tree, and you can see the area it gnawed away. 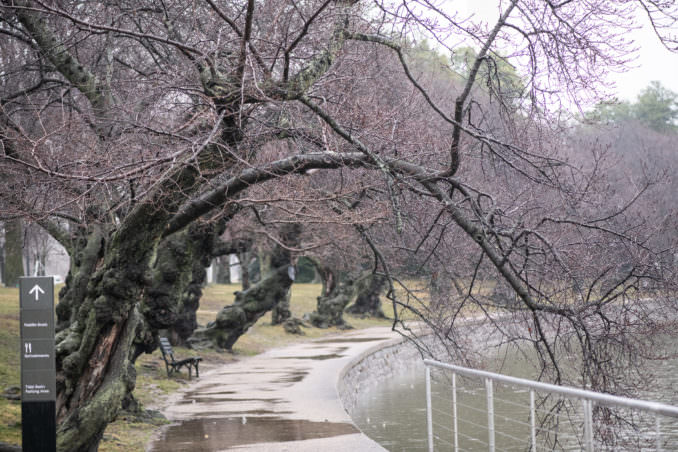 These are some of the oldest of the cherry trees. They’re near the MLK Memorial. 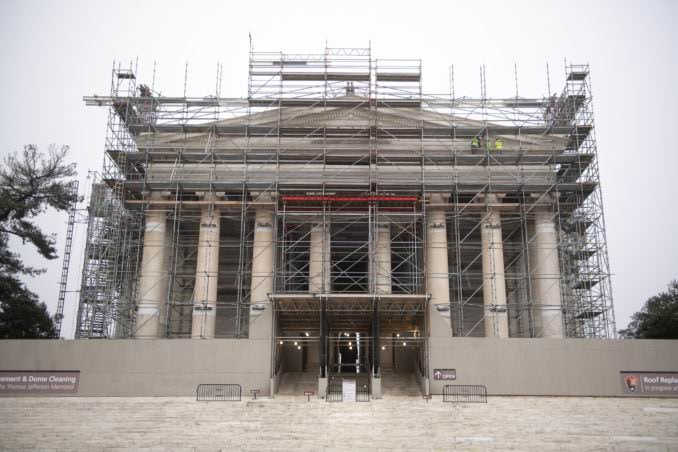 Scaffolding at the Jefferson Memorial. 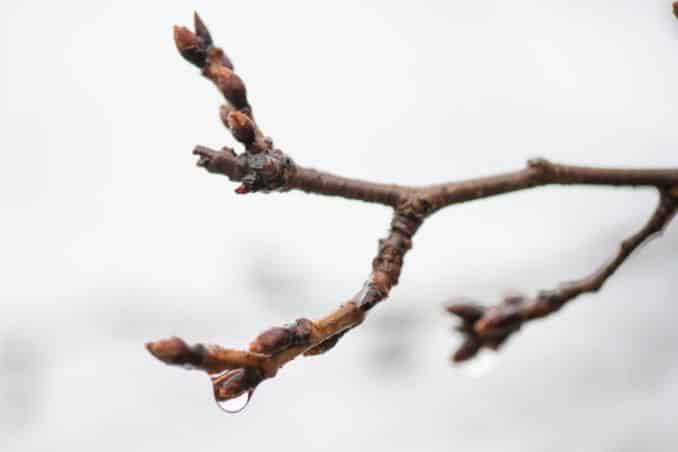 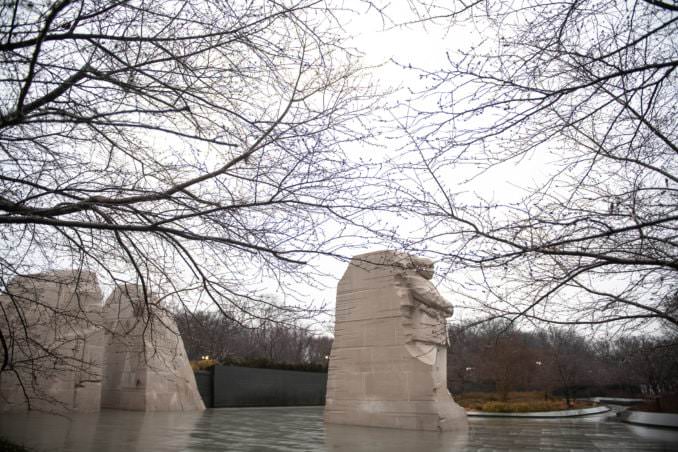 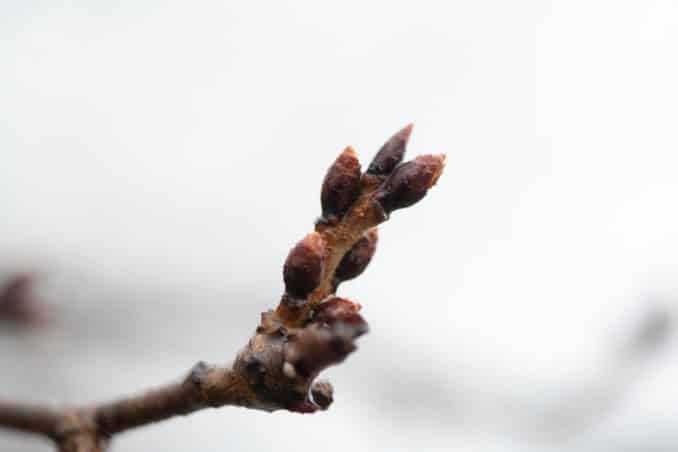 What to Expect from the Cherry Blossom Watch in 2021

Last year’s coverage was cut short abruptly on peak bloom day (I usually continue it until the cherry blossoms are completely done). That coincided with the local authorities changing their guidance from “please take precautions if you come” to “please stay home.” They soon sealed off the area and prevented anyone from getting to the Tidal Basin.

It’s been a long (!) year since then, and despite our best hopes at that time and some encourage signs in recent weeks, we’re still not back to anywhere near “normal.” Washington DC is still under COVID-19 restrictions, and the DC area is currently assessed at a very high risk level. The Smithsonian museums and Washington Monument are all closed indefinitely. There are strict occupancy limits on restaurants and businesses. In-person events for the National Cherry Blossom Festival have been canceled (that includes the Parade). All in all, it’s a good year to follow along from afar from the safety and comfort of your home.

In light of the circumstances, the Cherry Blossom Watch coverage is going to be a little different this year. It will be strongly focused on those who are following along from home. There won’t be the usual logistical information providing detailed information for planning your own visit.

What I will be providing are regular photos of the beautiful flowers and how it looks around the Tidal Basin. No, it’s not the same as being there, but hopefully it helps spread a little spring cheer. I’ll try to add updates so long as it remains safe to do so and complies with guidance from local officials.

And the good news is that we have real reason to hope that it will be much safer to plan in-person visits for the 2022 bloom!

When are the cherry blossoms going to bloom in 2021?

So far this winter, the temperatures averaged a little above normal during December and January, which happens to track with the National Oceanic and Atmospheric Administration’s long-range winter forecast. But February brought a long colder stretch that. So, for now, we’re tracking right around “normal” overall. And that, at this early stage, hints at a bloom that falls around the average of the last days of March into the first days of April. But it’s too soon to put any stock in that just yet–if we see a stretch of cold weather into March, it can push things much later, or a stretch of warm weather can still bring it much sooner.

To the extent that long-range temperature forecasts can be relied on, it looks like we can expect some slightly warmer-than-normal temperatures into March, gradually warming more once we get into the second week. It won’t be enough to bring out a very early bloom like last year (when peak bloom was March 20), but it might help coax them out a few days earlier than the average. But it all really depends on how the temperatures play out in the coming weeks.

Here’s how we’re tracking so far relative to previous years:

And here’s how that looks in graph form. The red line represents the historical average. The blue line represents the corresponding daily averages for this winter. Data is taken from the National Weather Service’s recordings from National Airport, which is just across the Potomac from the Tidal Basin.[^fn88]

Is the Tidal Basin open?

For now, yes. But it’s worth noting that NPS and DC officials did seal off the area last year to prevent crowds gathering, and it’s quite possible they might do so again this year in the interests of public health and safety. (Which is another good reason to follow along from home.)

A NPS spokesperson told the Washingtonian magazine this, which was repeated pretty much verbatim at the March 1 press conference:

Working with our cherry blossom partners and in consultation with the most recent guidance from the Centers for Disease Control and local health guidelines, the National Park Service continues to evaluate what, if any, opportunities will be available to view the blossoms in person at the Tidal Basin,” Park Service spokesperson Mike Litterst tells Washingtonian in an email. “We expect to make an announcement in the coming weeks.

Do I need a permit to take engagement photos at the cherry blossoms?

I mention this here because it is an issue that the NPS has addressed more explicitly in the past week. And they’ve done so in such a way that clears up any lingering confusion that the previous policy caused.

The short answer is that most engagement photo sessions do not require a permit. The key factor now isn’t whether it’s a commercial or non-commercial shoot but whether it’s “low-impact.” And nearly all engagement photo sessions fall within that category (i.e., fewer than five people, limited equipment, limited impact on the area or people around them, etc.). I have more details here.

Looking for travel stock photos or prints? I might be able to help. You can search my collection here:
If you already have a buyer account with Alamy and would prefer to use that, you can search my images directly here.
2.6Kshares