The cherry blossoms are certainly pretty in the daylight, but you don’t have to confine yourself to daytime shooting. There’s 24-hour, unfettered access to the Tidal Basin, and some beautiful shots to be had after the sun has gone down and before it comes back up again. I’m particularly a fan of the period just before sunrise when the sky starts to lighten up.

A tripod, of course, will come in very handy. There are lots of good tripods out there for all different styles and price points. Here’s the one I use as my go-to travel tripod. An external shutter release, whether cable, infrared, or smartphone, will also help minimize movement of the camera and help with tack-sharp photos. 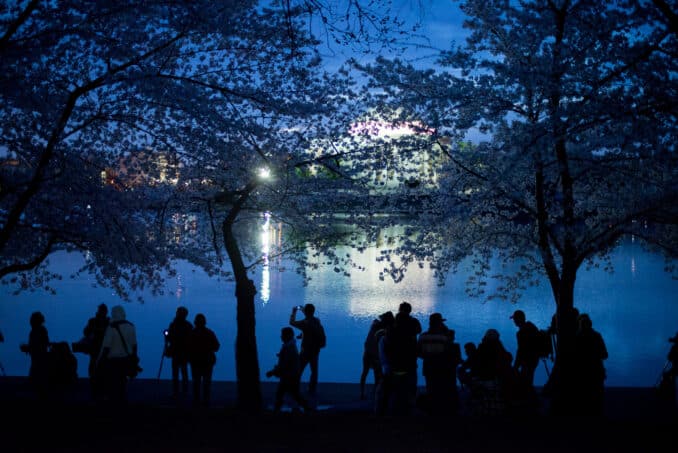 At one time, the cherry trees were lit up at night.[fn1] They’re not anymore, but the Jefferson Memorial, Washington Monument, and MLK Memorial are lit up.

By all means try a flash. I’m not much of a fan of on-camera flash for anything, and with the cherry blossoms it tends to flatten the perspective and wash out the colors. If on-camera or built-in flash is the only option you have, you might get better results turning it off.

You have a lot more control, of course, if you can get the flash off and away from the camera a bit. If you can dial down the intensity, that can be helpful in preventing the flowers from just becoming a block of bright white or pink. Fill flash on the flowers with one of the illuminated monuments in the background can be a very effective shot. It’s worth experimenting, especially if you can control the level of flash output.

Local Tip: I’ve always been amazed at how safe the National Mall is. You don’t tend to get panhandlers or touts like you do at most other tourist sites the world over, even though the visible police and ranger presence is actually pretty light (although they are there). Especially in the middle of a major city that has its fair share of crime issues.

That said, if you’re heading down to the Tidal Basin after hours, use common sense. Doubly so if you’re carrying expensive camera equipment. Be aware of your surroundings. Trust your instincts. Don’t go alone if you can help it.

The Tidal Basin is in a fairly remote and isolated area. You will have a bit of a walk to and from your car. Passing cabs will be few and far between. There are no stores or vendors nearby (during the day, there are a few small kiosks, but they’re closed at night). There’s not much, if anything, in the way of a security presence after hours.

So long as the weather is nice, there’ll likely be people around admiring the cherry blossoms up until at least 9pm. There’ll be some turning up just before dawn. In between, there might not be much of anyone around. That might be good for photos, but it’s less than ideal in terms of personal safety. So stay safe.

Take the Weather as it Comes
Avoiding the Crowds