When is the Best Time to Visit Washington DC to See the Cherry Blossoms?

The short answer is that there’s no easy answer. On average, the peak bloom occurs sometime around the last week or so of March through the first week or so of April. But precisely when during that period varies year to year. So here’s the longer version. 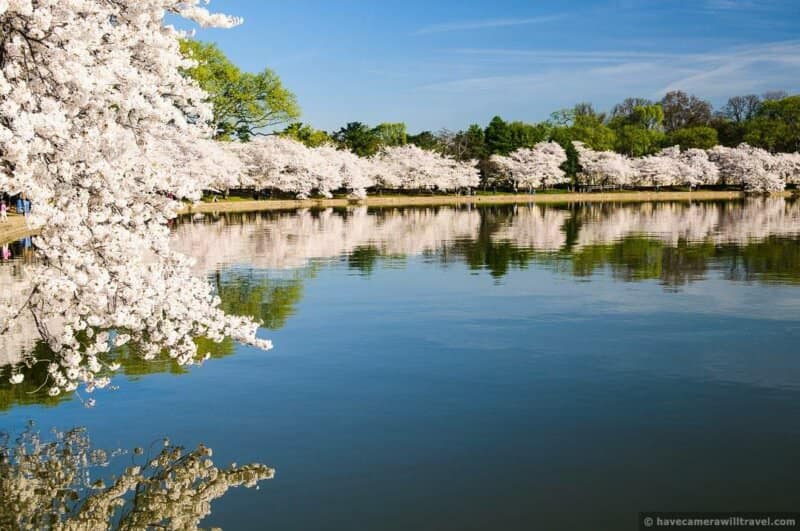 If you're looking to visit Washington DC during the blooming of the famous cherry blossoms around the Tidal Basin, you're going to have to contend with uncertainty about precisely when the cherry blossoms will be in bloom. I realize that uncertainty isn't much good if you're trying to schedule travel plans, so I've put together some information that helps you at least make an educated guess.

The cherry blossom blooming period is a relatively brief window–a week or two, really–when they go from just buds to beautiful flowers to falling off and being replaced by green leaves. I've put together a cherry blossom timeline that shows the various stages.

But the main complication is that the bloom date changes year to year, and we really don't know for sure when it's going to happen until it's almost upon us. Around the first week of March, the National Park Service issues its first peak bloom forecast for the season that factors in the winter temperatures, the current state of the trees, and the weather forecasts for the coming month or so. All things considered, the forecasts are remarkably good, but they're often off by a bit and it's not at all unusual for the forecast to change as we get closer to the date.

On average, the blooms come out sometime around the last week of March through the first week of April, and that's typically a good time to aim for if you're planning on visiting. But precisely when peak bloom occurs depends on the weather in the weeks and months leading up to it. And there's no guarantee it will even fall within that period. In 2012 the peak bloom fell on March 20. The following year, it was April 9. In both 2014 and 2015, it was April 10.

When making your travel plans, bear in mind that it's not unusual for peak bloom predictions to be revised as we get closer. They're based in part on long-term weather forecasts, and those have a habit of not turning out exactly as expected. So you might want to consider reservations that are refundable or can be rebooked with minimal penalty.

That variation is because the date of the peak is heavily dependent on local weather conditions in the months leading up to it. Warmer, sunnier conditions through the winter and early spring tend to bring an earlier bloom. Sustained cold, wintry weather delays it. Unseasonably warm and sunny conditions in 1990 helped bring an early peak on March 15, and very cold conditions in 1958 delayed the peak bloom until April 18.

The average peak bloom since 1921 is April 4. Here are the official peak bloom dates for the past decade or so:

For more on what “peak bloom” means, take a look at the post “What Peak Bloom Means and Why It (sort of) Matters.”

If I Come in May/June Will I Still Get to See the Cherry Blossoms?

No, I'm afraid they'll be gone by then. You can see them in various stages for about a week before peak bloom and for several days after, so the window to see flowers is really only a maximum of 2 weeks, often shorter. Here's a photo timeline of the progression that illustrates the point. The full bloom period is much shorter still. Even with a late bloom, such as we had in 2014, they're all gone by around a week or so after peak bloom. The latest peak bloom date on record is April 18 (in 1958), and even then the flowers would have been well and truly gone before the end of the month. This post on peak bloom might also be helpful.

The 2022 National Cherry Blossom Festival® will kick off on March 20 and run through April 17.

The festival is run by the National Cherry Blossom Festival, Inc., a 501(c)(3) not-for-profit organization and features a number of events, exhibits, and performances related to the cherry blossoms and U.S.-Japanese relations. Among the events and activities are a parade, fireworks, concerts, and special exhibits that take their theme from the cherry blossoms. You can find more information at the National Cherry Blossom Festival's official website.

The National Cherry Blossom Festival is typically scheduled around the average peak bloom date. The hope is that the blossoms will come out at some point during the festival, but there's no guarantee of that and it's unlikely they'll be out for the duration. In 2014 and 2015 the peak bloom fell right at the end of the festival. In 2016, with the early bloom, it fell right at the beginning of the festival. And in 2017 they even had to move the opening up at the last minute to take in what was expected to be an unusually early bloom. (In 2020 and 2021, the pandemic drastically altered the festival's program, and in-person events were cancelled.)

In recent years the festival has been extended to run across several weeks, which increases the chances that the peak bloom will fall within the festival dates. This year, the festival will run almost a month.

How Do I Get Tickets to See the Cherry Blossoms Blooming?

Tickets are NOT required to see the cherry blossoms. The trees are on public land cared for by the National Park Service. There are no fences or gates restricting access and no fees or reservations are required to visit. You are free to wander around as much as you like any time of the day or night.

If you want to do an organized tour, either by bus or by boat, that's different. They're all handled by private operators, and any tickets for those are for the boat tour or bus tour and are not admission tickets for the cherry blossoms (since you don't need admission tickets). Also, please note that the only boats allowed on the Tidal Basin are the paddle boats for hire. Any boat tours that advertise cherry blossom cruises are out on the Potomac around West Potomac Park, Hains Point, and along the Southwest Waterfront; those areas are also ringed by cherry blossoms, but it's not the picture postcard view you've probably seen of the Tidal Basin.

National Park Service rangers also conduct free walking tours of the trees that are scheduled throughout the day during the bloom. These are informal walks–no tickets are required. You'll find rangers around the MLK Memorial, the FDR Memorial, the Jefferson Memorial, and in the Maine Avenue parking lot where all the tents and facilities are set up during the Cherry Blossom Festival. They're a friendly lot–ask them for the day's schedule.

Camping is not allowed, and there are no designated picnic areas or grills. Parking restrictions are clearly signed. Parking is free, but at the height of the bloom parking spaces are in very high demand and DC's parking inspectors can enforce the rules rather enthusiastically.

Large, organized public gatherings, protests, or other special uses might require a permit. Commercial photography/videography shoots might also require a permit, although the reality is that unless you're disrupting others' enjoyment or using a large crew you won't run into much trouble. You can find details and application forms on the NPS website.

During the National Cherry Blossom Festival there are many other events and exhibitions that the Festival's organization hosts. Some of those might require tickets. Check their website for details.

Here are some good online resources to help plan your visit to Washington DC:

And if you're after a guidebook for Washington DC with maps you can carry with you, here are some good ones:

And if you're trying to get kids excited about the visit, National Geographic has put together a popular book for kids on the cherry blossoms, Cherry Blossoms Say Spring.

If you're just after a map, this laminated Streetwise one is good for the National Mall and surrounding area and includes a Metro map (the Metro is DC's version of subway public transport). MapEasy makes a more traditional fold-out map. Around the Mall and Tidal Basin, the National Park Service has done a pretty good job of putting up signs that are also very helpful, so you can find your way pretty well without a map.

If you're after information specifically about the cherry blossoms, these are good places to start (and also make very nice gifts):

And here's the same thing but looking only at the past two decades. As you can see, the dates are weighted a little earlier in recent years. Since 1993, the average peak bloom date has been March 31.1

Here are the official peak bloom dates since 1921.1