You can find the latest information on the 2016 cherry blossom peak bloom forecasts here.

The NPS announced that the cherry blossoms had reached peak bloom on April 10. That’s a day ahead of the original NPS forecast of April 11-14 and right in the forecast window issued by the Capital Weather Gang.

The cherry blossoms have come and gone for 2015. As of April 20, all of the trees are being covered in green leaves. You can find more information many more photos in the April 20 cherry blossom watch update, but here’s a sampling of how they were looking on April 20: 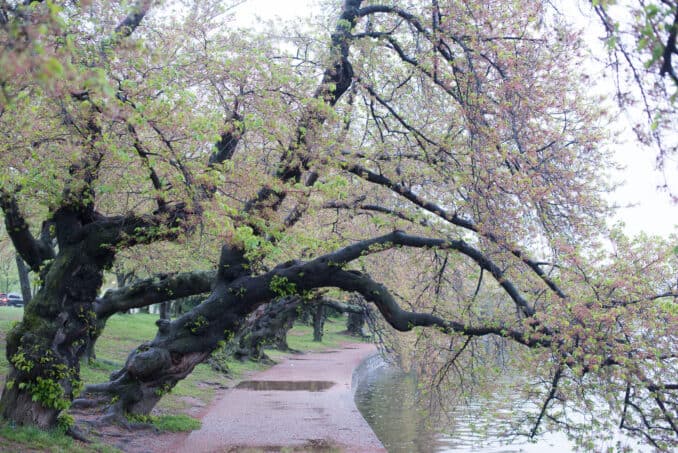 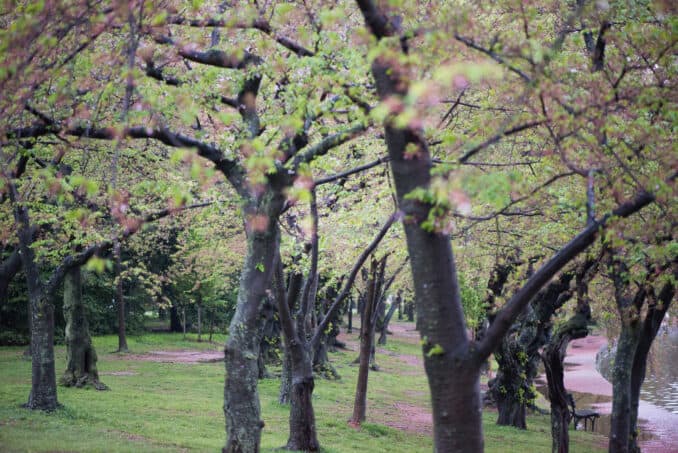 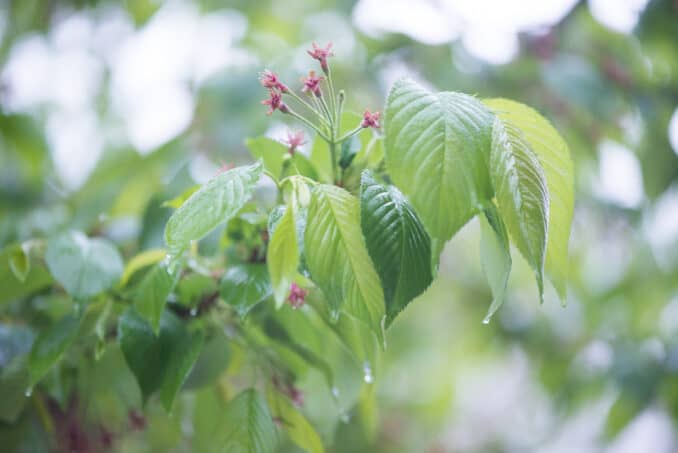 I’ve also posted a photographic timeline of what to expect, when as we head past peak bloom.

The National Park Service issued its first cherry blossom peak bloom forecast for the season at a press conference in Washington DC on March 3. They predict that peak bloom will likely occur sometime during the period of April 11-14. You can find more information on what the peak bloom forecast means here.

The Washington Post‘s Capital Weather Gang has issued their own forecast for a peak bloom falling sometime within the window of April 9 to April 13, “centered on April 11.”

It’s not at all unusual for these early predictions to be revised and refined as we get closer to the date, and I’ll keep this page updated with the latest forecasts. But it’s worth pointing out that last year the National Park Service estimate was spot on with their first forecast (they predicted April 8-12 and it ended up being April 10).

This prediction is for a peak bloom slightly later than last year, with the very cold February we’ve had and a March that is forecast to be colder and snowier than average slowing things down. If the prediction pans out, it wouldn’t be the latest peak bloom on record–that’s April 18–but it’s definitely on the very late end of things. The average peak bloom date is around April 3-4. It would also place it right at the tail end, or perhaps even missing, the dates of the National Cherry Blossom Festival.

The first part of Washington’s winter was pretty unremarkable. We had some unseasonably warm days around Christmas and some cold days early on. There were a few snowfalls, but not as many as last year.

But then February happened. February’s temperatures were colder than the historical average, along with some record-setting lows. Overall, it was the area’s coldest February since 1979. It was a cold, wintry month. March started cold and snowy but has, in recent days, warmed up a bit.

The cold weather has affected all of the area’s flowers. Daffodils are sprouting but not yet flowering, and the tulips are still a while away. Various fruit blossoms and tulip magnolias will among the first flowering trees to come out, but they’re not flowering yet.

What to Expect, When

I’ve put together a timeline of photos from past years to illustrate the progression of the bloom ranging from about a week before peak bloom to about a week after. You can find it here.

If you’re planning a visit, I’ve put together some ideas on where to stay if you’re looking for hotels in Washington DC and how to get to the cherry blossoms once you’re here:

The 2015 National Cherry Blossom Festival will be held March 20 through April 12. The current forecasts put the bloom right at the tail end of the festival. When the festival was first started back in the Depression era of the mid-1930s, it was a one- or two-day affair. Over the decades since it has become longer and longer, and it now stretches over three weeks.

The Festival includes many events around the city. Here are some of the popular highlights for 2015:

The Credit Union Cherry Blossom Ten Mile Run is scheduled for April 12. If the current peak bloom forecasts hold, it will be perfectly timed for the runners to get a beautiful view as they head around the Tidal Basin and Hains Point.

The Tidal Basin will still be open and accessible on the morning of the race, but road closures will create complications for visitors trying to get there, especially those planning to drive and park. Road closures will start at 2AM and run through 11:30AM. Expect a ripple effecting lasting beyond that. Here’s a map of the road closures [PDF]. By far the best bet will be to walk or use the Metro.

If you arrive while runners are still running you’ll have to find a way to cross the road safely without disrupting the stream of runners. But while you wait for the stream to thin out, feel free to get into the spirit of the race. Having run it several times myself, I can say that the cheering really is appreciated.

When is the Best Time to Visit Washington DC to See the Cherry Blossoms?
What to Expect, When